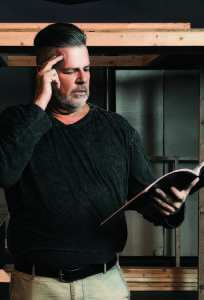 When you come to the Jewish Community Center for a CenterStage production, an art exhibit, a drawing class or a lecture, you know you can count on it being a high quality experience. Always looking to improve, the J is taking the arts to the next level by combining all these areas into a single new Arts and Ideas Department.

The JCL, JCC and Jewish Federation President and CEO Sara Klein Wagner announced, “John R. Leffert will serve as director of the new department and he will work closely with long time JCC professionals Slava Nelson and Marsha Bornstein to create a tapestry that will transform the existing arts programs into a new series of cultural and creative experiences that will enable participants to engage with a whole spectrum of colors, shapes, threads and textures that interact and illuminate.”

“We are excited to create this tapestry together,” Leffert said. “With CenterStage, the Jewish Film Festival and the Patio Gallery leading the way, music, literature, culinary arts, art classes and lectures will be added to our tapestry of Arts and Ideas, making the J the center of not only Jewish arts programming, but an arts leader in Louisville.”

One of the first new programs is an Arts and Ideas series of speakers who will be featured once a month from March through June. The Arts and Ideas Department will also bring back the Goldstein/Leibson Lecture Series, which, over the years has brought in Jewish luminaries and scholars to speak.

“The passion of the Goldstein and Leibson families hold for Jewish learning and dialogue inspire me,” Leffert said, “and I am excited to work with them in creating inspiring and relevant programming to mark the return of this unique lecture series.” Watch upcoming issues of Community for details.

Liel Leibovitz
Leading off the author series is Liel Leibovitz, who will discuss his emotionally astute and philosophically observant novel, A Broken Hallelujah: Rock and Roll, Redemption and the Life of Leonard Cohen on Sunday, March 20, at 3 p.m. at The Pointe, 1205 E. Washington St.

This biography is more than an account of Cohen’s life, but instead gives us an intimate look at the passionate poet turned musician delving into the sources and meaning of his work beautifully illuminating what Cohen is telling us and why we listen so intensely. The afternoon will also feature performances by Cantor David Lipp of Cohen’s music, including his popular Hallelujah. You will have the opportunity to meet Mr. Leibovitz and have your personal copy of the book signed during a reception following the show.

The Pointe is a historically certified space located in the heart of Butchertown, Louisville’s once thriving meat packing district. Once a 19th century, leather, lace and cotton sash factory, The Pointe’s blend of original industrial features with contemporary architectural design makes it the perfect venue to celebrate this inaugural Arts and Ideas Event.

Details and tickets for the event can be found by clicking here.

He not only shares memorable stories from his celebrated music career and best-selling autobiography, Blood Sweat and Tears and My Rock and Roll Years: Is Steve Katz a Rock Star?, but he will also perform some of his well-known hits.

From the Monterey Pop Festival with the legendary Blues Project, Woodstock with Blood, Sweat & Tears, and even producing albums with the incomparable Lou Reed, the answer to Katz’s question is yes, he is a rock star.

Following Katz’s intimate concert, you will have the opportunity to meet the legend as you have a personal copy of his biography autographed.

To make this night even more special, the evening will start with an open bar cocktail hour followed by an elegant catered dinner by Anoosh Bistro, whose name is synonymous with superb dining.

Chef Anoosh Shariat’s dazzling talents and eclectic menu of contemporary American cuisine fused with Contemporary European cuisine have given Anoosh Bistro a reputation as one of Louisville’s best restaurants.

The cost for this program has not yet been determined.

Old Jews Telling Jokes
What’s so funny about old Jews telling Jokes? Everything! Get ready for an outrageous evening of homespun fun with one liners, double entendres and hysterical routines sure to triple you over with laughter. Celebrating the rich tradition of Jewish humor and storytelling, this hilarious show will pay tribute to classic jokes of the past and reinvent some new ones as well.

The fun and laughter will begin on Saturday, May 14, at 7 p.m. at the Standard Country Club with “Old Jews Telling Jokes.” When Ed Bornstein, the creator of this event, along with four other local comics take the stage in the rich tradition of stand-up comedy, anything could happen. One thing is certain, hilarity will ensue.

With an open bar cocktail hour, a catered dinner by Masterson’s, Louisville’s leader in event catering since 1938, and a smash hit show that could be on the stage of any major comedy club, this evening promises to be an evening of unabashed fun.

Like rye bread, Kosher pickles and bagels, there’s something for everyone. You’ll laugh ’til you plotz.

The cost for this program has not yet been determined.

Lucy Aharish
The Arts and Ideas Series will wrap up with “A Conversation with Lucy Aharish,” Israeli News Anchor, Reporter and Television Host on Tuesday, June 28 at the Jewish Community Center.

Aharish currently presents the Evening Edition as the news broadcaster of i24news, and serves as a morning anchor on a current-affairs show on Channel 2. She is notable for being the first Arab news presenter on Hebrew-language Israeli television.
This event is free.

With limited seating available, these events are sure to sell out quickly. Make your reservation today by calling 502-459-0660.

Arts and Ideas Staff
In his 16 years as artistic director, John R. Leffert has built CenterStage into one of the best theatre programs in the area. “I am excited to step into my new role,” he said. “There is so much potential here.

“Through quality programming and a wide array of opportunities, members of this community will discover and refine their tastes, deepen their convictions, and develop life-long habits of cultural participation,” he added. “Arts and Ideas will become the common thread or glue, if you will, in developing new and enriching programs. We will strive to attract and engage a broad and diverse audience while at the same time building celebrating and building community.”

Slava Nelson will continue to lead the Patio Gallery and visual arts classes, but also will work with Leffert to create new programs and opportunities for, but not limited to adults ages 40 and older.

“There seemed to be a gap in programming for this age group,” stated Leffert. “We want to make sure we are engaging people at every age level and not leaving anyone out.” Not wasting any time, Nelson has already planned the speaker series described above. “Slava Nelson is the perfect person for this position. Her energy is incredible and her ideas endless,” said Leffert. “I look forward to working together with her and seeing this program grow each year.”

Marsha Bornstein, another vital member of the Arts and Ideas team, will continue to serve as director of the successful Jewish Film Festival. This year’s festival, with three more films yet to be shown, has been drawing record crowds. (See story, CenterPiece, page 1.)

“I feel so fortunate to have a team that shares my passion for the arts and my vision for this department. Together, I know we are going to do great things.” said Leffert. The new Arts and Ideas department is just one of the many exciting changes happening at the J. While we just concluded our 125 year celebration, we do not plan to stop there. New ideas and initiatives like Arts and Ideas will propel us into the future. Together we will weave this tapestry and with everyone’s support can continue to enrich lives and create community.

We filled the house: fans of world music, fans of jazz musician Harry Pickens, and fans of peace. In conjunction with World Interfaith Harmony Week, Interfaith Paths to Peace sponsored a concert on Saturday, February 6, at St. Paul United …

There is a Chasidic story that holds there are 36 hidden righteous people in the world at any given time, and it is the goodness of those 36, known as lamed vavniks, that God chooses to sustain humanity. It is …