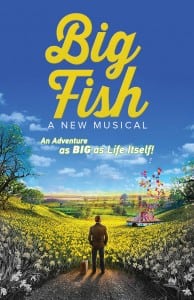 Big Fish, the most recent CenterStage production, based on the novel by Daniel Wallace (1988) and the movie written by John August and directed by Tim Burton (2003) is much in the vein of James Thurber’s The Secret Life of Walter Mitty (1939), a short story about a man who dreams his life away.

Like Walter Mitty, Edward Bloom makes up stories in which he is the hero. He tells his son, Will, tales of derring-do where he encounters witches, catches a big fish, kisses a mermaid and, among other things, rescues his hometown of Ashton, AL, from a menacing giant who comes with Edward to join the circus where he falls in love with his future wife, Sandra.

The problem is that there is a fine line between fact and fantasy and Will outgrows the stories while Edward never does. In the end, Edward is dying and Will wants the facts for himself and the boy he is about to have with Josephine, his fiancée. He also wants to unravel the mysterious relationship between Edward and his childhood sweetheart, Jenny Hill, played with poignant verve by Jennifer Poliskie.

He discovers the link between Jenny and Edward but finds the rest of the task to be impossible and, in the end, helps Edward to finish his life story by telling his father one last Edward Bloom story before he dies. Edward is buried near the river he loved and where the first of his stories, an encounter with a big fish, took place.

The strong performances by Pete Lay, who plays Edward Bloom; Melissa Kenney Shepherd, who plays his wife, Sandra; and Mitch Donahue, who plays Will Bloom, are the heart of this fractured fairy tale where truth and reality are fuzzed and their love for each other is all that matters.

In the end, Will accepts the myths that his father has spun throughout his lifetime because their essence is based in truth and it is a fact that Edward Bloom was a man who was a teller of glorious tales who loved his son.

Next up is How to Succeed in Business without Really Trying, March 31-April 10.

Have you ever wondered what it would be like to work with professional basketball players? For Sammy Schulman, who grew up right here in Louisville’s Jewish community, that’s just part of his everyday job because he is the chief financial …

The Center for Women and Families (CWF) will honor five Women of Distinction and present the Joan E. Thomas Lifetime Award for Peacemaking at the 29th Celebration of Service & Survival on Friday, February 26, 2016 at the Seelbach Hotel. …

“We welcome you to Ricaree. We’re mighty glad you’re here. We’ll set the air reverberating with a mighty cheer.” Do you remember where you were when you realized the JCC was special or a place you wanted to go to …