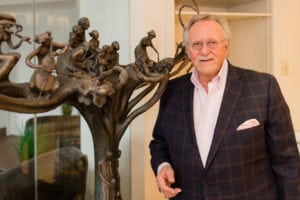 Frank Weisberg has left a living legacy through his artwork. (Community photo by Tara Cocco)

(Editor’s note: This is the first in a series of profiles of Jewish Louisvillians who have left their mark on the community through the LIFE & LEGACY program and their own work.)

The Weisberg family’s commitment to Jewish Louisville began with Charles and Marian Weisberg, who held every imaginable volunteer position in the community.
Frank Weisberg has continued that legacy, most recently through a pledge to LIFE & LEGACY with his wife, Barbara.
Frank’s legacy also is visible at major Louisville institutions such as the Kentucky Center for the Arts, the Louisville Visual Art Association, and the Brown Theater, where paintings by Frank, a successful artist, adorn the walls.
Frank found his passion for painting at age 40, many years prior to his retirement from Bass & Weisberg Realtors. A doodler since childhood, he enrolled in a painting class at a friend’s suggestion. Thirty-three years later, he paints in the same studio where he took his first lesson.
His first painting was inspired by a photo he saw of late night talk show host Johnny Carson’s living room, which was dominated by a large painting over the fireplace of a blue polo jacket hanging from a wooden hanger. Mesmerized by it, Frank completed a larger-than-life, totally painting of his own blue polo jacket six months later.
That first project reflected his style as an artist. His love for clothing, food, everyday objects and “in your face” subjects defines his body of work, which consists of approximately 70 paintings (he’s not sure how many), all of them created in the heroic realism or trompe l’oeil styles.
His first one-man show, “Closet Series,” which hung in the Patio Gallery in 1998, featured paintings of his own clothing as well as several of Barbara’s shoes. Over the years, his work has received high praise and can be found hanging in the headquarters of the Kentucky Center for the Arts, Louisville Fund for the Arts, Jewish Hospital and JFCS.
He has won two Best of Show Awards from the Woman’s Club of Louisville, and his work has been featured in numerous publications.
Frank used to prefer showing his paintings at one-man exhibits, even loaning instead of selling them.
Now, he is beginning a new chapter in his career, producing a signed and numbered limited edition series of giclees (inkjet reproductions) of his paintings, which are for sale.
A Louisville native, Frank is proud of his city, his artistic accomplishments and his family’s history of giving back.
His pledge to LIFE & LEGACY is the latest in a long history of supporting Jewish Louisville. He and his brothers funded the 1992 publication of Jewish Louisville and have endowed The Weisberg Family Wellness Fund, The Marian Weisberg Youth Theater Fund and The Charles L. Weisberg BBYO Fund. These entities reflect their family’s legacy, which benefits the community and the arts.
The magnificent bronze Tree of Life, created by sculptor Barney Bright, is an example of that commitment. Commissioned and funded by the Weisbergs, it captures the essence of The J.
Frank has chaired the committee to create the Louisville Jewish Archive, which recently culminated in a formal agreement with the Filson Historical Society. His generosity is well known. Through LIFE & LEGACY, he continues to support Jewish Louisville for future generations.

Want to help?
To make a LIFE & LEGACY pledge, ensuring that Jewish Louisville remains vital and secure for generations to come, contact Jennifer Tuvlin at jtuvlin@jewishlouisville.org.