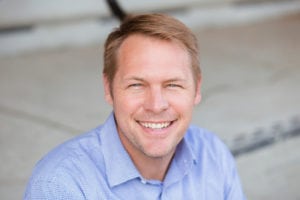 For Jason Groneck, and his team, architecture has as much to do with buildings that make a difference as well as condos and retail.
A principal for GBBN Architects, and the project manager for the future J, Groneck said his firm has developed a reputation for designing and developing structures for the nonprofit sector, what he calls “community hubs.”
GBBN’s hiring is the latest step in JTomorrow! – the project to develop the new J at the Dutchmans Lane campus that will make a difference in Jewish Louisville for generations.
Community hubs matter to GBBN, Groneck told Community in an interview.
“It’s one of our key markets,” he said. “It’s been rooted in our core business going back to the first year of this firm’s inception 60 years ago.”
In fact, GBBN, which has offices in Louisville, Cincinnati, Pittsburgh and Beijing, has been involved with 15 community hub projects. Among them:
• The Novak Center for Children’s Health – a University of Louisville physician and medical office building project;
• The YUM! Practice Facility for UofL men’s basketball and women’s volleyball;
• It also designed the Cincinnati Shakespeare Company’s Otto M. Budig Theater;
• The Erie Art Museum in Erie, Pennsylvania;
• School buildings in Ohio and Kentucky with gym and aquatic facilities.
While this project will be GBBN’s first JCC – Groneck believes – it won’t be its first Jewish project. In Cincinnati, GBBN is working on the Holocaust and Humanities Center at Union Terminal. That facility is scheduled to open in November.
All these projects involve uses one would expect to find under the roof of a JCC, he said.
For this project, Groneck will head a team that will will do the architecture, planning, exterior and interior design work. It will “consult out” all mechanical, electrical plumbing and engineering services.
To assist with the project, GBBN has engaged Brandstetter Carroll, a Lexington firm that specializes in aquatics.
The next step in the process is to complete “discovery phase” – what the firm calls the process of defining the project.
Parts of the process are already completed, including the focus groups, drafting a vision statement and project goal and department programming sessions.
Next up, Groneck and his team will make observations of the existing space, assessing the outdoor pools, identify “design drivers” for JTomorrow! and finalizing the program, a step that includes square footage requirements for the future center.
He hopes to complete the discovery phase by late August.
A University of Kentucky graduate and an architect for 15 years, Groneck moved to Louisville in 2010 to help open GBBN’s office here. In 2015, he was named to Louisville’s Business First’s “40 Under 40” list
He remarked on the opportunity to enhance the Jewish experience in Louisville.
“Reflecting the essence of the Jewish culture and values into programing that’s opening, welcoming to anyone, I think is a major mission and design challenge for this project,” Groneck said. “It’s not just a building, it’s not just about the architecture, it’s about enhancing people’s lives, so I think that’s kind of where our head is.”