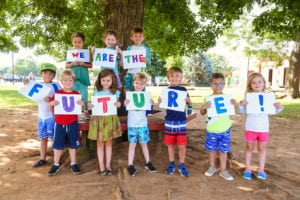 As a thank you to donors, J campers send a message to Jewish Louisville. (Community photo by William Beasley)

The 2017-18 Annual Campaign set some high bars for success: $2 million in donations, a jump in first-time givers.
Mission accomplished on both counts.
In an exit interview on the just-completed campaign. Co-chairs Jerry and Madeline Abramson and Ariel and Faina Kronenberg lauded some impressive numbers from this year’s fund drive.
• They exceeded the $2 million goal, raising $2,075,579.
• They added 195 new donors to the rolls.
• They inspired 264 donors to increase their giving.
• They pushed the number of total donors to 1,070.
All of which means the allocations committee had more money to distribute this year, according to Jerry Abramson.
“The reality is we set a goal, and we surpassed it,” he said.
Stacy Gordon-Funk, vice preseident of philanthfopy, thanked the volunteers who worked on this year’sd campaign.
“We are extremely grateful the community stepped forward to support the annual campaign by giving so generously. How fortunate we were to have the skilled leadership of the Abramson’s and Krnonenberg’s who worked tirelessly to ensure the success of the campaign. We owe much of our success to them and the other volunteers who partnered with the Federation staff”
Ariel Kronenberg took note of those 1,070 donors, broadening the base of JCL support.
“I thought the new donor number was very significant,” he said. “There were a lot of people who lapsed over the years that were engaged…. I think that’s a big part of that number.”
Several younger Jewish Louisvillians gave for the first time, Jerry Abramson said, yet he, too, was impressed by the reengagement of lapsed donors.
“They were reenergized by the energy in the Jewish community in this point in time and they wanted to be a part of it.”
When the four co-chairs took the job last summer, they committed to shaking up the traditional campaign.
Again, mission accomplished.
The annual dinner was set aside this year in favor of a series of “Herzlian events” in which local speakers met with small groups in intimate, mostly home-based settings to speak about their projects and encourage giving. The series is designed for donors of $5,000 or more.
The series was named for Theodore Herzl, the father of modern Zionism, who coined the idea of small events.
“More people attended, more people pledged, and the expenses were much lower than bringing in a national speaker,” Madeline Abramson said.
The Herzlian events will return this coming year, but with a twist. Instead of people just signing up for events, Faina Kronenberg said participants will be invited to a cocktails/appetizer social where the coming speakers and venues will be showcased, enabling guests to choose with their friends which ones to attend.
Faina Kronenberg also plans to tap an untapped donor pool, working with a friend on a fall program to connect with Russian Jews.
Her husband, Ariel, noting the increase in donors from the 800 range of past campaigns, said he believed there were still more untapped human resources in the community, which numbers approximately 7,500.
“There’s still potential out there,” he said.
Jerry Abramson praised the Women’s division for its series of successful events during the campaign, as well as the men’s day program at Churchill Downs.
The co-chairs also singled out the 25 members of the Leadership Cabinet – a cross-section of the community – and other volunteers who worked the phones for donations, as well as Federation staff for their behind-the scenes efforts on all the events.
“We didn’t do it, Jerry said of the co-chairs. “We did it with the help of a lot of people.”
Madeline addressed the 264 donors who upped their pledges this year.
“The fact that we had 264 donors increase shows a sign that people have confidence in the leadership of the Jewish community here,” she said.
She also noted that fewer than 100 donors gave at a lower level.
“Everybody has a story,” Madeline Abramson said. “We had people who were retiring, whose spouse had passed away. They wanted to be supportive, but they couldn’t give at the same level they had been giving.”
When the two couples teamed up last summer as co-chairs, the idea was for the Kronenbergs to learn from the Abramsons’ experience, then step in to a senior role for the next campaign and train another couple.
That is still the plan.
“For us, it was amazing to work with Madeline and Jerry,” Ariel Kronenberg said. It was an honor, because it created kind of an energy. People liked to see the older generation and the younger generation working together to bring this campaign to a successful conclusion.”