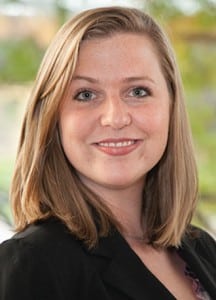 When you talk with Lenae McKee Price about CenterStage and the Jewish Community Center, her whole face lights up and her energy and enthusiasm are contagious. She’s eager to tell you what makes this place special. It is evident in the results she gets as CenterStage development and outreach manager.

That is why Price will receive the 2015 Arthur S. Kling Award at the Jewish Community of Louisville’s Annual Meeting on Sunday, June 14, at 9:30 a.m. Price began working at the JCC in 2012, and has been making a difference ever since. She develops and implements comprehensive fundraising, marketing and outreach campaigns to engage program participants, community partners and donors for CenterStage’s main stage shows and education programs.

During her tenure, CenterStage’s corporate sponsorships have increased 733 percent; individual donations are up 1,174 percent; season subscriptions have increased by 271 percent and the number of Acting Out school performances is up by 400 percent.

These results, Price insists, are “the result of the collaborative efforts of the entire CenterStage staff and committee. … We wouldn’t see numbers like this without John’s [Leffert] hard-lined commitment to producing professional quality productions and the dedication of the hardest working committee in Louisville, the CenterStage Board of Directors.

“I’m more emotional than I thought I would be,” about receiving the Kling Award, she said. “Obviously I’m honored. To me it feels particularly special because it’s just nice to know that the love and commitment that I have for the JCC as a whole is being reciprocated.

“I always feel welcomed and appreciated here,” she continued, “and this is just a very significant sign of that. It’s nice to know that when you put your heart fully into something, it shows.”

Wherever she goes, Price talks up CenterStage and the JCC, and she loves bringing new people into the building. “You don’t have to spin anything,” she says because her experience is always so positive. “That makes the job easier.”

She also likes working with other JCC staff members. “Everyone’s always very welcoming to outside ideas,” she said, “and it doesn’t ever feel territorial.”

Earlier this year, she also had the opportunity to participate in the JCC Association’s Israel Enhancement program. She came back to energized and full of ideas about how to incorporate more about Israel into many aspects of programming at Louisville’s JCC.

After graduation Price moved to New York City where she worked for Long Island’s most effective non-profit business advocacy organization, Action Long Island. Initially hired as director of development, she greatly increased membership, board participation, corporate sponsorship and brought the organization a surplus of media attention, new and renewed interest from the community and support from elected officials. Within one year, she was promoted to executive director of Action Long Island.

Price founded the Young Adult Alliance, a coalition of organizations, companies, and individuals working to engage, educate, and mobilize young professionals in the region.

In 2011, Price was honored at the “30 Under 30” Celebration of Long Island’s Young Professionals and received special recognition from Congressman Steve Israel for her work in the community.

Price never left her passion for theater behind. In New York City, she served on the Board of Directors of Roots and Wings Theatrical and continued to participate in numerous productions as a performer, director and producer.

“I have recently been able to get back into my personal artistic outlet,” she said, “doing theater again, which has been nice. One of the perks of working for a theater and in a flexible atmosphere is, I still have the opportunity to do things that make me happy outside of the JCC. That’s been really exciting.”

Price has returned to the stage, performing at the Bard’s Town. Last year she appeared in Collected Stories, and later this summer, she will perform in Other Desert Cities.

“It’s been surprising that there’s this whole other world of theater people that aren’t musical theater people but are still very dedicated to the theater world,” she said. “It’s been nice to meet new people and be able to bring them over into the CenterStage activities and to put myself into their activities. I feel like the community expanded exponentially by just putting my toe in the water with other theater companies.”

Price met her husband, Jordan Price, in New York, and in 2011, she brought her Yankee husband down South so she could take a position as director of development and marketing at Kentucky Shakespeare.

Jordan Price, who is also an actor, has become a regular member of the CenterStage company.

The Prices have a daughter, Billie, who is enrolled in the JCC’s Early Learning Center, so, Lenae Price says, “I try to participate in that program as much as possible. I try to go to any and all JCC events.”
“We’ve really made a life here,” she said. “Billie participates in all of the programming between preschool and summer camp, and Jordan’s in a lot of the shows every year. I feel like I live here but it doesn’t bother me at all. If you have to live somewhere, it may as well be a place like the JCC.”

Arthur S. Kling Award
The Kling Award honors the memory of Arthur S. Kling who was a prominent leader in the Jewish community, serving as president of the Young Men’s Hebrew Association (YMHA), the predecessor of the JCC, and on many of its committees. He was among the leaders instrumental in establishing the JCC on Dutchmans Lane. He was also instrumental in establishing the Bureau of Jewish Education and the Conference of Jewish Organizations, which ran the United Jewish Campaign.