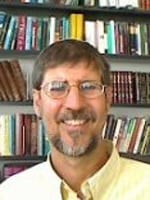 With a focus on sustainability and environmental responsibility, Spalding welcomed Rabbi Dr. Natan Margalit as guest speaker at the 34th Keenan Lecture on Thursday, April 23.

He described early attempts at environmentalism as reductionist science – if you keep breaking down a problem to it’s smallest components, you will find the answer to the problem. That, he pointed out, was very simplistic and often resulted in unintended consequences.

A classic example he cited happened in Borneo where there was an outbreak of malaria. Since malaria is spread by mosquitos, experts decided that the answer to the problem was to spray DDT. After they were sprayed, the mosquitos were eaten by the geckos, which were, in turn, eaten by the cats. When the cats died, the rat population increased leading to an outbreak of typhus. To combat the typhus, cats had to be reintroduced into the area.
Today there is a realization that the world is complex and systems are interrelated. We can learn from breaking systems down to their elements, but then, to truly understand it, he cited Denis Noble that we must put it back together and look at the network of connections. Rabbi Margalit compared it to the relation of a note or a chord to a total musical composition.

He posited that the whole systems approach also opens the door to dialogue between science and religion. As he expanded upon his thesis, Rabbi Margalit presented quotes from a variety of sources, many of them from religious sources.

He pointed to Rabbi Abraham Joshua Heschel’s concept of radical amazement and Rabbi Naftali Zvi’s contention that the whole Torah is a song so to extract the full meaning we need to examine it from different perspectives and look for patterns.

He concluded to understand the world around us we need to pay attention to the shift from breaking things down to their smallest elements to paying attention to wholeness and how things fit together. All things are nested in interrelated patterns, he said. We can belong to more than one group and one little thing can make a difference in the whole.

Spalding President Tori Murden McClure welcomed everyone at the beginning of the lecture and Dorena Miller Parminter provided Rabbi Margalit’s introduction. The school provided a dessert reception for the event.

CenterStage Academy just finished its big production of Seussical, Jr., and the program was a huge success. The class, which trains children to perform in a musical production, then finishes with a show, went swimmingly, said Frank Goodloe III, a …