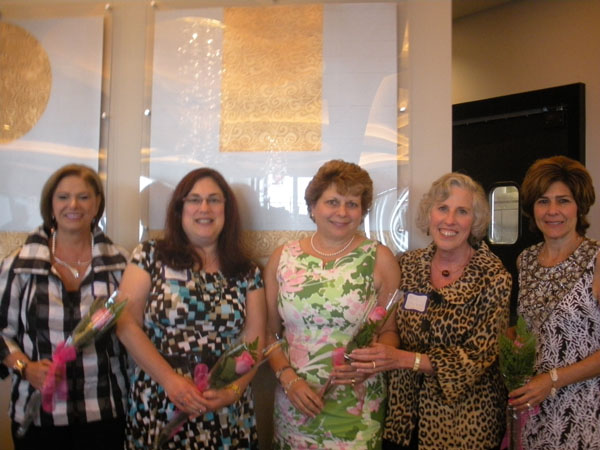 Life begins and ends with girlfriends

The National Council of Jewish Women, Louisville Section’s closing meeting and installation of officers at Rivue on Wednesday, May 16, was delightful. President Mindy Klein, who is beginning her second year as section president, called the meeting to order and thanked the women in the audience for helping her with a busy, fun, educational and challenging year.

Ellen Rosenbloom presented one of two Emerging Leader Awards to Beth Salamon, who served on the section’s board, was co-vice president of membership and is currently vice president of public affairs. She also serves on the board of the Jewish Community Resource Council and Jewish Family and Career Services, where she chairs the Mitzvah Committee.

Elaine Weinberg presented the second Emerging Leader Award to Sue Paul, NCJW vice president of administration. Paul has served the section as financial secretary and bulletin editor and was involved with the domestic violence initiative. She co-chaired the Jewish Community of Louisville’s Super Sunday telethon and is devoted to giving back to the community through service.

Karen Kohn introduced afternoon’s the keynote speaker, Judith Van Ginkel, Ph.D., president of Every Child Succeeds, a non-profit organization that helps first-time parents in at-risk families in Southeast Ohio and Northern Kentucky create a nurturing, healthy environment for their children. Van Ginkel mentioned that NCJW’s HIPPY program in Cincinnati provides services for children after they leave the ECS at age 3.

Her topic for the day was her new book, Life Begins and Ends with Girlfriends, which she co-wrote with her girlfriend, Betsy Kyte Newman. Many in the audience connected with Van Ginkel when she described stories of women friendships discussed in the book “the essence of who we are.” She urged those in the audience to reconnect with someone they might be thinking about contacting today rather than waiting until it is too late. The “friend part is more important than “best friend” status and we should celebrate temporary friendships as much as those long-term.

[by Shiela Steinman Wallace] From the moment people walked in the door for this year’s Jewish Family & Career Services MOSAIC Awards, it was obvious that something was different this year. In the past, people made a beeline for the …

Donors of major gifts to the 2012 Federation Campaign were treated to an appreciation dinner on Sunday, April 29, at the home of Alison and Stu Silberman. This was also an opportunity for those in attendance to meet and talk …