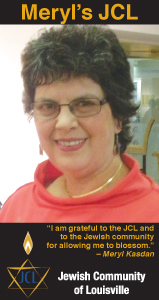 From the day Meryl Kasdan landed in Louisville, she has had a love affair with the city and its Jewish community. The relationship has only become richer and more meaningful in the years since. “This is a wonderful community,” she says, “and I have made it my own.”

A native of Olympia Fields, IL, she earned a bachelor’s degree in social work from Valparaiso University and an MSSW with a focus on medical social work from the University of Louisville’s Kent School. Her first job in town was as a social worker/activities director at Four Courts Senior Center, where she immediately found herself enveloped by the Jewish community.

She was young and not yet married at the time, and especially remembers being warmly welcomed by Judy Freundlich Tiell, by the late Ruth and Abe Rosenstein, and by every rabbi in town. “They really comforted me, she recalls.” This was before Jewish Hospital assumed responsibility for Four Courts in 1983. Kasdan remembers it as an era when members of the Jewish community shared the responsibility of caring for their own, and she worked with some 40 volunteers to do good things for the home’s elderly residents.

Her early relationship with the organized Jewish community brought its own rewards when she met her husband, Frank, during a meeting for participants in one of the Jewish Community Federation of Louisville’s (a predecessor to the Jewish Community of Louisville) Singles Missions to Israel. “We got acquainted in Ed Cohen’s living room,” she says with a smile, “and were married two years later.”

Kasdan goes full force in life, which is amazing for someone who was diagnosed at age 12 with dystonia, a movement disorder that causes muscles to contract and spasm involuntarily. She explains the neurological mechanism that makes muscles relax when they are not in use does not function properly as a result of the disease. Opposing muscles often contract and force the body into awkward, irregular movements and postures. She works with the Dystonia Medical Research Foundation and she and her family help raise funds and awareness of the condition and the Foundation.

Kasdan has always overcome any personal obstacles and stepped up to volunteer. She was active with Dunn Elementary and Noe Middle schools when her son, Arthur, was a student there and she spent time helping Jewish Family & Career Services. A former Hadassah group president, she has been a member of the National Council of Jewish Women’s board for several years and is now the Louisville Section’s financial secretary.

She also has made time to grow Jewishly and is a proud 2002 graduate of the JCL’s Melton Adult Mini School. She has taken Melton graduate courses over the years and is currently studying Hebrew with the thought of having a bat mitzvah in five years or so.

“I feel so fortunate to have had so many opportunities through the JCC to get out in the community and be a part of it,” says Kasdan. “I’ve been a member for 25 years (Frank grew up at the Center) and consider it my second home. I have taken art classes, work out and swim at least three times and week, love attending CenterStage plays and like meeting my friends there. Frank and I travel quite a bit and have seen other JCC’s around the country. Although some might be bigger than we are, we offer more and are far busier. We really think our Center is the best.

She believes that Louisville is a wonderful place to live and she has great respect for all of those who helped her get to this point in her life. “I look forward to continuing to develop myself,” she says, “and to keep giving back to this great community in the future.”

In Louisville, our Jewish community is faced with a serious problem. Our Jewish agencies – the independent agencies including: Jewish Family & Career Services, Louisville Beit Sefer Yachad, The Temple Hebrew School, the Louisville Jewish Day School and the High …

The newly refurbished Seng Jewelers Wading Pool is nearing completion. The concrete base was poured on Thursday and will cure over the weekend. There are only two steps remaining before it is open to the public. Once the concrete is …

The experience a child has in preschool lays the foundation for success in school and throughout life, so choosing the right preschool for your child is a critical decision. The Louisville Jewish community is blessed with several high quality preschools. …