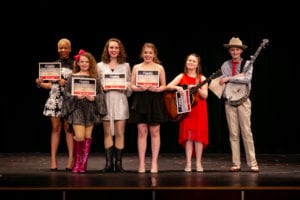 Future stars came out Sunday, Fed. 23, at the Ursuline Arts Center, for the 2020 performance of Louisville’s Got Talent. This year’s finalists included vocalists, guitarists, a poet and a bluegrass duet – all wowing the crowd of some 400 people. (Community photos by Jessica Budnick)

Every year, the talent on stage at the Louisville’s Got Talent (LGT) finals is astonishing, and the 2020 edition on Feb. 23 was no different.
Ruby Miller, a 15-year-old freshman at Floyd Central High School, won the top prize for singing and dancing to “If I Loved you,” from the show Carousel.
“[I was] so shocked,” Miller said of her win, which comes with a $500 grand prize. “There’s such a wide variety of acts and so many young, talented people, it was crazy. I’m so grateful!”
But Miller’s performance was more than just a song. She has been doing vocal training with singer and actor Debbie King-Raque since she was 7. King-Raque died in January, and the song Miller sang was one that she had worked on extensively with her instructor.
“I just want everyone to know that I did it for my voice teacher,” Miller said.
Ryane Jones, an 18-year-old senior at Sacred Heart School, won the 13- to 18-year-old group with a reading of her own poem, When You Look at Me. She won $300.
The poem was part of a Martin Luther King project at her school. 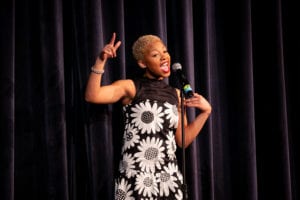 “I’m the president of my school’s Black Student Union, so every year we have a Martin Luther King Jr. celebration, assembly type thing,” she said. “We were brainstorming things to do that would be interesting and just make the program more fun, because in past years, we noticed it was kind of bleh. Because I write, I decided to write a poem, and I recited it, and it went over really well.
“People loved it,” she continued. “It was really moving for me to write, especially, and to be able to perform it, especially, because it was my own writing. It was definitely special.”
A spoken-word poem isn’t the typical winner of a talent competition, so Jones was surprised to win. “I wasn’t really expecting to win because there were so many talented people here, and I was really excited and really happy that I won.”
Brannock McCartan, of St. Aloysius School, and Ashlyn Smith, who is homeschooled, make up the band Kentucky Borderline. They won the 6- to 12-year-old group with an instrumental bluegrass duet. McCartan played the banjo; Smith, the guitar.
The pair met a few years ago at LaGrange Coffee Roasters, which hosts a weekly bluegrass jam, and later began playing together as a duo. They have appeared on WoodSongs Old-Time Radio Hour in Lexington, WAVE 3 News and WDRB News. They also play at numerous festivals and have performed at the Ryman Auditorium in Nashville.
“It feels great; I didn’t really expect it,” McCartan said of winning the age group. “There were a lot of good acts.”
This year, LGT decided to award a People’s Choice award to each age group instead of just one. Each of the winners received $150. 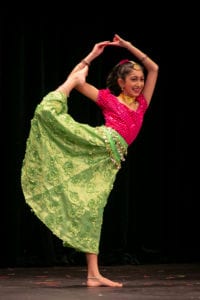 Kennedy Julian, who played guitar and sang Mean, by Taylor Swift, won the 6-12 age group. Her sister, Kameron Julian, who also played guitar, sang Twinkle, Twinkle Lucky Star, by Merle Haggard, winning the 13-18 age group.
LGT was started seven years ago by Jake Latts as his bar mitzvah project to raise money for CenterStage’s Acting Out – a program that brings live theater to local schools.
The show has continued annually ever since, raising more than $50,000 in support of Acting Out and auditioning more than 1,000 acts. This year’s show attracted 100 would-be finalists.
Latts is now a freshman at Yale University and was unable to attend this year’s show, but his mother, Kate Latts, said she was thrilled with the performances this year.
“There were no hitches, and there was just a fantastic group of diverse kids, diverse talents, diverse areas of the region, diverse ages,” she said. “It was fantastic!”
There were nearly 400 attendees at this year’s show, which was held at Ursuline Arts Center. LGT moved to Ursuline last year to accommodate larger audiences.
Kate Latts said she’s pleased by the money the show is raising. 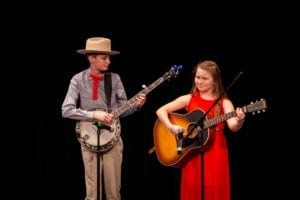 “This just continues on supporting Acting Out, which is an amazing program at the JCC,” she said. “We had a packed house here today; we had an amazing turnout at auditions and terrific sponsors.”
Frank Goodloe, artistic director at The J , hosted the show along with Marvis Herring, anchor for WLKY. Goodloe said he had done some promos with Marvis on WLKY for LGT and Hair, so he asked him to emcee the show.
“There were so many talented acts,” Goodloe said. “I mean the judges took forever to deliberate.”
This year’s judges were Beth Craig Hall, founder of Actors Center of Training and a talent scout for the Helen Wells Agency; Emily Albrink, an opera singer and assistant professor of voice at the University of Louisville School of Music; Carter Wood Sartor, a singer-songwriter; Kateryna Sellers, principal dancer for the Louisville Ballet; and Robert Massey, CEO of the Louisville Orchestra.
Goodloe hopes this year’s performances will encourage more kids to audition next year.
“It’s amazing,” he said. “The talent just keeps getting better and better each year, so definitely come out next year when we have our auditions again.”