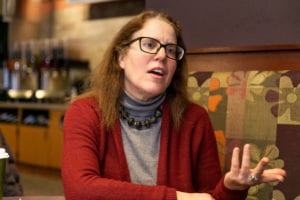 Of all the efforts to bring peaceful coexistence to Jerusalem, Rabbi Dalia Marx said few are as successful, albeit coincidental, as the city’s public transit system.
The Light Rail tram, which began operation in 2011 is literally bringing Jerusalemites of all backgrounds together, Marx said, if only on short commutes.
During those quick rides across the city, she said, it’s not uncommon to see a Jewish boy offer his seat to an elderly Palestinian woman, secular and haredi riders seated side by side, people brushing against each in the scrum to get off and on the cars while trying to say “excuse me” in the other’s language.
Just every-day living in very close quarters.
“That’s like a moving lab,” Marx said of the tram. “All of a sudden, you see different kinds of people in the same car, riding together, and they have to deal with it. It’s like a metaphor for the whole situation.”
Which is different from the Jerusalem of today, an ancient city that, according to Marx, is becoming increasingly polarized between Jews and Arabs, and Jews and Jews. Her own brother and sister have left.
But for Marx, a 10th-generation Jerusalemite, the City of David is in her DNA, and she is staying put.
“Jerusalem is challenging,” the Israeli Reform rabbi said, “but for me, I’m not going to be chased away from my home.”
She stubbornly believes in the city’s future, and she sees reasons, like the tram experiences, to be hopeful.
“I think that this tension – this unique tension you may experience in Jerusalem – is also something very fruitful in terms of what we can become, what can be done, so in that sense, I’m optimistic.”
Marx, the Rabbi Aaron Panken Professor of Liturgy and Midrash at the Jerusalem campus of Hebrew Union College-Jewish Institute of Religion, was in Louisville for two weeks in February, serving as scholar-in-residence at The Temple and Temple Shalom.
She’s most comfortable talking about religious topics, such as how Judaism is expressed today.
But in an interview with Community, she drilled down on life in the city as seen by a progressive Jew with deep roots there.
Marx traces her Jerusalem lineage through her mother’s family – Sephardic Jews who were expelled from Spain in 1492. They then lived in Morocco, Italy and Turkey before settling in Ottoman-ruled Palestine in 1772. For a couple generations, they resided in the Galilean city of Tzfat before moving to Jerusalem, where they have dwelt for the past 250 years.
Marx counts several rabbis in her family tree as well as shadarim (messengers) who were liaisons to Diaspora communities, including one relative who made contact with Indian Jews in the 18th century.
Eventually, though, her grandfather – a lawyer and judge – and her mother became secular, shunning religious life as many Israelis do.
“She didn’t want to speak any Ladino, which is a shame, I think,” Marx said of her mother. “She didn’t want to have any of that because ‘we are Israelis and we have to speak Hebrew; that’s our national language.’”
Her father, a German Jew, came to Palestine with his family in 1938. (He had his first birthday aboard the ship). As a boy, he never spoke German in the streets, and his parents didn’t speak Hebrew at home.
“Until he went to kindergarten, he didn’t have a public language,” Marx said.
Despite her secular parents and upbringing, Marx gravitated back to religion.
Ordained in 2002 at HUC-Cincinnati, she has spent much of her career in teaching in her hometown, which has given her a front row seat to the struggle in Israel between Jews and Arabs, progressive and orthodox Jews. 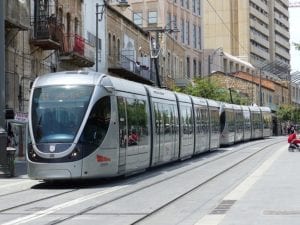 Jerusalem’s Light Rail tram is a “metaphor” for peaceful coexistence in the City of David, Rabbi Dalia Marx says. (photo by Claude villetaneuse)

Though life in Jerusalem is becoming polarized, Marx said it wasn’t always that way.
She recalled stories told by her grandfather, who lived in the Old City, about his family’s interaction with Muslims.
He described to his granddaughter how, just before Passover, the women in his family used to carry all their chametz (bread, flour, etc) to their Muslim neighbors.
“By the end of Pesach, the Muslim ladies would bring back cakes and cookies, because they (the Jewish women) couldn’t make them until Pesach was over,” Marx said. “That was a moment of celebration…. They would all feast together. To me, it shows that it (peaceful coexistence) is doable.”
In fact, Jews and Muslims lived together peacefully for generations until the political issues drove them apart, she said.
But today, Marx notices a greater Arab presence in western Jerusalem than in the past. In French Hill, where she and her family live, their building also houses two Palestinian families, not to mention a Haredi family, a Modern Orthodox family and a Conservative family, and secular and nondenominational residents.
The neighborhood also has a community-owned pub, a co-op where neighbors gather, bring food and homemade wines. Even some Muslims, whose religion prohibits alcohol, show up.
“A lot of interesting things are going on under the radar in many ways in Jerusalem,” she said.
The divide between progressive and Haredi Jews poses a trickier kind of polarization.
Even though a growing number of Haredi Jews are living there, compared to secular or progressive Jews, Marx said there remains a growing liberal Jewish presence in the city. There are four Reform kehilot (communities); Marx rattled off the names of rabbis leading them, some of whom were her students in seminary.
There are nondenominational religious entities, too, much so that it is no longer unusual for Israelis to choose a Reform or Masorti (Conservative) synagogue when they need or want one.
But religion remains a tough sale for many Jews in Israel, where the ultra-Orthodox Chief Rabbinate maintains tight control over marriage, divorce and other lifecycle events.
“Entering a synagogue is a very political act,” Marx said, “and some Israelis don’t want to hear anything Jewish because of the religious coercion we undergo. Everything is controlled by the chief rabbinate.”
When she gives interviews or appears on TV programs in Israel, Marx prefers to be referred to as a “rabbi,” not a “Reform rabbi,” she said, noting that an Orthodox rabbi would not be qualified that way.
But she said progressive streams of Judaism must offer themselves as alternatives.
“We have to rethink our synagogues to include more than just services,” Marx said. “We have to rethink what Israelis need and how they need it. We have to be much more present in the educational system and the public sphere”

Habitat for Humanity of Metro Louisville dedicated its 525th house on Saturday, Feb. 22, this one built for a Muslim family from Somalia with considerable help from Jewish Louisville. All five synagogues contributed a total of $10,000 to the project, …