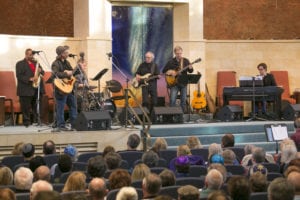 They sang Hallelujah at Congregation Adath Jeshurun Sunday, April 2, but it wasn’t a religious service.

It wasn’t an anti-war protest either, though the 400 in attendance swayed to Blown’ in the Wind.

But the capacity crowd did see some of Louisville’s best-known performers – Jew and non-Jew – pay tribute to the music of Bob Dylan and Leonard Cohen, two Jewish artists who changed the 20th century music landscape and have left indelible memories.

The public radio show Kentucky Homefront taped two programs live Sunday from the bima of AJ’s main sanctuary. They’re part of an episode series, “A Bird in the Wind: Kentucky Homefront Celebrates the Music of Bob Dylan and Leonard Cohen,” which will air at a later date.

“Each artist brings a … song of their own choosing and own interpretation,” said Kentucky Homefront host John Gage as he opened the Dylan program, the first of two tapings. 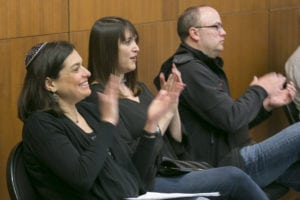 Cantor Sharon Hordes (left) and vocalist Jennifer Diamond take a break between their own numbers to enjoy the show. (photo by Ted Wirth)

For Cohen, the salute was posthumous. The legendary musician and poet died November 7, 2016, at age 82 – a note not lost on Cantor David Lipp, who sang many of his songs that night.

As he tuned up to sing, Who By Fire, inspired by the High Holy Day Unetaneh Tokef, Lipp told the crowd, “This is the first time I’ve sung it when Leonard was not written for one more year.”

Dylan, on the other hand, won the Nobel Prize in Literature last October, an honor that thrilled his fans, but irked others who thought a novelist, essayist or poet should have won.

Among the Jewish Louisvillians who sang were Lipp, Cantor Sharon Hordes of Keneseth Israel, vocalist Jennifer Diamond of the Temple, and Louisville Orchestra conductor Teddy Abrams.

In addition, Robert Sachs, a short story writer, and Michael Jackman, a writer, poet and senior lecturer of literature at Indiana University Southeast, read stories they had written for the occasion. 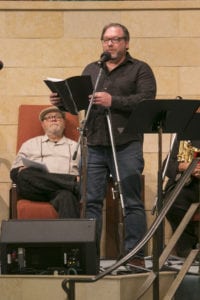 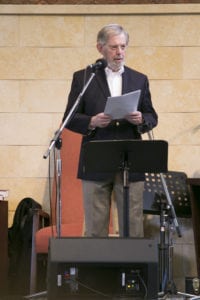 Sachs read a pierce titled Dance Party 1963, about a man who lines up a Dylan look-alike to perform at a reunion for his friends, only see things turn out not quite the way he planned.

Jackman’s story, Belonging, is about an orphan coming of age who discovers he is Jewish. In his search for a family to belong to, he gravitates to the music of Cohen.

There were standout moments during the show. When Hordes, accompanied by the house band, sang Dylan’s I Shall be Released, she infused Osey Shalom into the lyrics.

Lipp’s collaboration with Abrams on the keyboard for Cohen’s Sisters of Mercy brought the crowd to its feet for a standing ovation.

And Diamond’s solo rendition of Cohen’s Everybody Knows was edgy, sultry and soulful.

The idea for the series, Lipp said, took root last fall when Gage saw the cantor perform five of Cohen’s songs with the Pat Lentz trio. 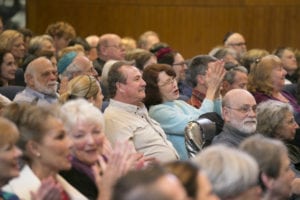 A capacity crowd of about 400 listened to both live shows of “Kentucky Homefront” in the main sanctuary of AJ. (photo by Ted Wirth)

“I think said he wanted to do something with Cohen’s music,” recalled Lipp, who has made previous appearances on the Homefront. “Little by little, the idea grew. When Cohen came out with what turned out to be his last CD and Dylan won the Nobel Prize, we started to think the program might include both Dylan and Cohen music since the former was clearly an influence on the latter.”

It’s not clear when the shows will actually air (Community will report the dates times), but when they do, rest assured you’ll hear Gage’s customary sign off do: “Be good to yourself, be good to each other, and walk softly on Mother Earth.”

As Madeline Abramson will tell you, the Red Cross always needs more volunteers. There are currently 3,000 volunteers in the Kentucky Region alone, she said – still not enough. “Do we need more? The answer is yes,” Abramson said. “Particularly …

May is going to be an entertaining and engaging month for Chavurat Shalom. Please join us for the following programs: • Thursday, May 4 – Get your Derby on! We’ll be playing Derby-themed games and music. Lunch will include grilled …

Like butterflies, the names of the children filled the air. It wasn’t just their names, though. It was their drawings, their music, even their dreams. One said she would eat nothing but white bread when she went home, another would …