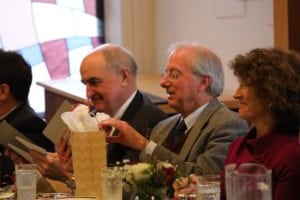 President Donald Trump faces the most challenging situation in the Middle East of any president in U.S. history, former Ambassador Dennis Ross said during a recent appearance at Indiana University

Speaking March 21 to a capacity crowd at an event sponsored by the Helene G. Simon Hillel Center at IU, Ross explained that the civil war in Syria alone would pose enough challenges for the new president, but that Trump must also deal with a proxy war in Yemen, ISIS fighting in Iraq and borderline instability in Egypt.

These conflicts, he said, threaten the overall stability of the region, where rebuilding will cost hundreds of billions of dollars.

Even if the Israeli-Palestinian conflict were resolved, Ross said, it would not work out the myriad other problems in the Middle East.

But the Israeli-Palestinian conflict can only be resolved, he continued, with the assistance of other Arab nations. Such cooperation could bring benefits far beyond final border status if it were to happen. Ross noted how Israeli technology, which is being used to address the ongoing drought in California, could also be put to work lessen pressing water shortages in the Middle East.

A leading diplomat and Middle East expert, Ross has served presidents from both parties. He

He is currently the William Davidson Distinguished Fellow at the Washington Institute for Near East Policy.

Barbara Schwartz and Ken Grossman, both of Louisville, were honored guests at the VIP dinner at Hillel prior to Ross’ presentation at the Kelley School of Business. Their sons, Michael Schwartz, a student in the School of Public and Environmental Affairs, and Jack Grossman, a freshman in the Media School, were also on hand.

IU President Michael McRobbie, introduced Ross at the event and the dinner. He was invited to the university as part of the IU Hillel Jewish Agency Israel Fellows to Hillel speaker series.

In a statement to Community, Grossman called Ross’s depiction of the conflicts in the Middle East “incredibly insightful and troubling.”

“He explained that President Trump’s administration faces more challenges than any U.S. president in history,” Grossman said. “The challenges include the failing states of Syria, Libya, and Iraq; the wars against Isis and Assad; and the potential of Egypt a country of 94 million people also becoming a failed state. We all gained a deeper understanding of the challenges in the Middle East and the Israeli – Arab peace process. I was thrilled to go back to my Alma Mater and attend the event with my son Jack.”

In a separate statement, Schwartz added. “IU Hillel did an incredible job planning, organizing, and executing the event. The a cappella group Hooshir is amazing. Their versions of Hatikvah and our national anthem were most inspiring. It was fabulous to have the opportunity to hear Dennis Ross thought provoking presentation. Michael has benefited from his experiences at IU Hillel. This was just the icing on the cake.”

(Shayna Goodman is a junior at Indiana University majoring in Jewish studies.)

Ever since I moved to the United States, I have visited Israel, my homeland, about twice a year. Over the years, I’ve managed to experience each and every Jewish holiday there. For some reason, though, I always missed Israel Independence …

The prophet Ezekiel (11:16) states that wherever the Jewish people shall go, they are commanded to make a “mikdash me’at” – a small sanctuary, with an eternal light, so that they would remember that which is eternal in the midst …