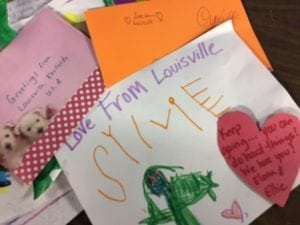 In addition to the tons of necessities donated to the Love from Louisville drive, many people also made cards with expressions of support for the refugees in Greece. The cards will be sent with the collections. (photo provided by Gray Henry)

Jewish Louisville played a role in the recent two-week citywide drive to collect clothes and other necessities for needy refugees in Greece.

Temple Shalom and The Temple served as collection points for the Love from Louisville drive, an interfaith effort to collect clothing and necessities for people who had reached the Greek shores, fleeing war and hardship in their homelands. Many came with little more than the clothes on their backs. Many others died during the journey.

Last week, volunteers from the synagogues – in cars, vans and SUVs – transported the collections to the Supplies Over Seas warehouse in Butchertown. There, the items were sorted and packed for the trip to Greece.

Rabbi Gaylia Rooks said she saw one person at The Temple who had removed the seats from her van and made several trips to Butchertown, her hatch full every time.

“People just kept bringing and bringing,” she said. “It was just a big outpouring of love.”

At Temple Shalom, a row of SUVs were parked outside the synagogue early Friday, March 24, to transfer their collectables. Volunteers cleared out a hallway and roomful of boxes, bags and baskets of clothing and shoes within minutes. 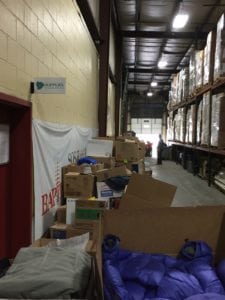 The Supplies Over Seas warehouse was nearly filled to capacity Friday, March 24, as a steady stream of volunteers delivered donations. (photo by Lee Chottiner)

Supplies Over Seas, which served as the operations center for the drive, is a Louisville-based nonprofit organization that meets critical health care needs in medically impoverished communities around the world. It does so by collecting and distributing medical supplies and equipment and other necessities.

Denise Sears, president and CEO of SOS, said enough items had been collected to fill two overseas shipping containers, double what she expected to receive. The containers will be holding 37,000 pounds (18.5 tons) of collectables, to which SOS has assigned a monetary value of more $100,000.

Sears said the monetary value is required by the Greek government for customs.

Firefighters, Army chaplains from Fort Knox and people from all walks off life, including Louisville Mayor Greg Fischer, assisted Supplies over Seas in sorting and packing the collectables.

In a big assist, UPS agreed to fly some items to Greece where Jesuit Refugee Services is working to get them to the people in need.

Gray Henry, a board member of the Center for Interfaith Relations, who conceived the idea for the drive, said many people stepped forward to line up collection points, write the flier, design the logo, secure donations and do a host of other chores necessary for success. Some organizations are donating large amounts of rice and macaroni. 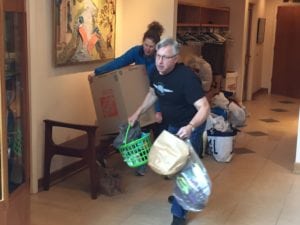 Jennifer Jacobson and Mark Epstein of Temple Shalom gather the last of the collectibles donors had brought to the Lowe Road synagogue for the trip to Supplies Over Seas. (photo by Lee Chottiner)

She hopes the network established to assist refugees in need will now stay together to tackle other critical projects.

“Now that we have Love from Louisville set up, let’s just keep working,” Henry said. “Why should it be one-off?”

Henry said she got the idea for the drive while at a John Hale lecture on January 14 at the Speed Art Museum. During the program, Hale showed a short film made by Ai Weiwei. Ai a famous Chinese artist and dissident, who has made to the refugee crisis a major issue. (In February, he created a outdoor display in which he wrapped 14,000 life vests left refugees on Greek beeches around the columns of the concert hall in Berlin.)

In the film, Ai spray painted an ancient vase before shattering – to gasps from the audience.

“You’re shocked over the breaking of this old ancient vase,” Ai said in the film, but not the loss of a life washing onto a beach.”

“I just started sobbing because I know it’s true,” Henry said. “I’m thinking, here’s this Chinese man doing this; why not us who are warm and well fed here in Kentucky?”