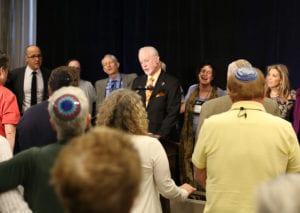 At 9:52 a.m., Saturday, Oct. 27, 2018, Rabbi Hazzan Jeffrey Myers’ life changed forever.
That was the time when the spiritual leader of Tree of Life * Or L’Simcha Congregation in Pittsburgh called 911 to report his synagogue was under attack by a heavily armed gunman.
At that moment, Myers recalled, he didn’t know if he would live or die.
“Who could ever think you’d be in a position where you tell the 911 officer on your cell phone that you think you hear footsteps, take a moment to pause to quietly recite the Shema and Vidui and ask God to make it quick, debating in your mind if you hang up your own lifeline to the outside world and possibly record a farewell video to your wife and children.”
But he did live, and now he has a mission: do what he can to help rebuild his shattered congregation.
“Ultimately, God answered me, ‘Jeffrey, it’s not your time. I have things I need you to do. I am sending forth seraphim (angels) in the guise of a SWAT team to rescue you.”
Myers recalled those harrowing moments while speaking last week before a packed room of his colleagues at the 2019 Cantors Assembly (CA) Convention in Louisville. He was there to collect an honor, the first-ever Kol HaNeshamah Award, for his efforts to protect his congregants during the shootings and minister to them in the days, weeks and months that followed.
“With what many of us believed to have been divine inspiration, every decision Jeff made under stressful conditions was the right choice,” CA Executive Vice President Stephen Stein said in presenting the citation.
Eleven people were murdered and seven others were injured, including four police officers, on Oct. 27, when a gunman entered the synagogue in the Squirrel Hill neighborhood of Pittsburgh, shouting anti-Semitic statements, and opened fire with semi- automatic weapons. 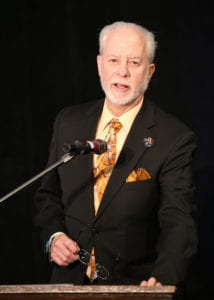 Myers: We are all victims.

The building, which housed Tree of Life and two other congregations, has been closed since that day due to extensive damage. Myers has publicly stated they will rebuild.
Since the shootings the rabbi-cantor has spoken frequently, including to President Donald Trump, Israeli Prime Minister Benjamin Netanyahu, and other dignitaries, including the ambassador from Saudi Arabia.
He led the Mourners Kaddish during a Shloshlim concert performed by the Pittsburgh Symphony Orchestra at Heinz Hall – the first time Myers believes that prayer has been recited at that venue.
Speaking to the power of music, Myers said he felt a burden too heavy to bear until that concert. But the music director, Maestro Manfred Honeck, signaled his percussionist to sound the tubular bell 11 times for the 11 victims. On the 11th tone, “I felt God’s presence as he personally lifted me, ended my shloshim and eased my burden.”
Afterwards, he embraced Honeck and thanked him.
It’s not just Tree of Life that must heal.
“One of the many things I’ve learned is that one need not have been inside the Tree of Life to be a victim,” he said. Jewish in the other synagogues across the country – the world – were victims, too.
“That includes you, my dear colleagues,” he told the cantors in the room. “I’ve heard it in your voices, and in your hugs and in your love. You, too, are victims.”
Tree of Life, he said, has received at least 30,000 pieces of mail since the shootings. He’s read many of them.
“The language is the same. Everyone who writes is a victim.”
So he outlined seven steps for religious leaders to ease the pain brought on hate and victimhood:
• Have an emergency plan in your synagogue;
• Do a walk-through with police to identify security challenges;
• Have security present;
• Get to know your neighbors through interfaith programs;
• Address the fear your congregants feel.
• Reconnect with worshippers through adult education;
• Practice self-care. “I’m not embarrassed to say that I see a psychologist every week,” Myers said. “I probably will for the rest of my life.”
During the program, Cantor Steven Stoehr, on behalf of the CA, designed with colors and symbols of the City of Pittsburgh in mind, which will travel to synagogues around the country as a “platform” to as a way to raise money for the restoration of Tree of Life.
“While millions of dollars have been raised for Pittsburgh and victims and families and those manners of care, the building itself still needs help,” Stoehr said, “and insurance isn’t going to cover that.”
Myers has struggled to describe how damaged the synagogue is, noting that there was previously no other comparable incident in the country.
“It’s defiled,” he said.