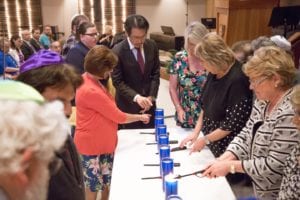 Sonia Milrod said she wouldn’t be here – meaning alive – were it not for the courage of a wartime Japanese diplomat named Chiune Sugihara.
Likewise, she wouldn’t be here – meaning America – if post-war immigration laws mirrored today’s code.
In front of 300-plus people who packed Temple Shalom Wednesday, May 1, for the annual Yom HaShoah Community Holocaust Commemoration, Milrod, whose father was one of thousands of Jews saved by Sugihara, said her parents came to San Francisco in 1947 after World War II on her father’s student visa. They then traveled to New York where she was born in 1948 – a U.S. citizen. They eventually earned green cards, enabling them to stay in this country.
Had all this happened under today’s laws, Milrod said, she doesn’t believe her parents, Lydia (Hernball) and Jerry Milrod, would be permitted to remain.
“Under today’s laws, my parents couldn’t stay in the U.S.,” Milrod said. “I only wonder, where would they would have been deported to?
While Wednesday’s program, titled “Conspiracy of Kindness: How One Man’s Brave Decision Saved Many Lives,” paid tribute to Sugihara, Milrod offered her family’s story as reminder that the United States must remain open to refugees.
“We must find a better path to asylum for today’s refugees,” she concluded.
Jerry and Lydia were both refugees from Nazi persecution. They met and married in Shanghai, China, though they took very different routes to get there.
Lydia’s family fled Germany following Kristallnacht, sailing first to Bangkok, then to Shanghai, thanks largely to money her father had spirited out of the country, earned through its fashion business.
Jerry, who was from Lodz, fled Poland with his family after Germany invaded the country in 1939. They eventually made it to Kovno, Lithuania, where the Japanese consul, Sugihara, was issuing travel visas to fleeing Jews.
In fact, Sugihara handwrote more than 2,000 visas against his government’s wishes, an act of defiance that would cost him his career after the war.
On the strength of Sugihara’s visa, plus an exit visa Jerry managed, with some deception, to obtain from Russian authorities, he traveled to the port of Vladivostok on the Pacific coast, then on to Kobe, Japan, and finally to Shanghai.
Noting the complexities of war, Milrod said Sugihara risked everything to save desperate Jewish refugees.
But she also gave a nod to Japan, the country that attacked the United States at Pearl Harbor and the Philippines in 1941, and savagely fought U.S troops through 1945. Japan, she said, had resisted Nazi pressure to eliminate Jews under its control, instead sending them to a ghetto in Shanghai, which was crowded, impoverished and disease-riddled.
“But they were safe,” she said.
For Milrod, of Mason, Ohio, Wednesday’s program was something of a homecoming. She lived and worked as an educator in Louisville for years, and even belonged to Temple Shalom, where her children became b’nai mitzvah.
Also present for the ceremony was Itsuroh Abe, Japanese consul in Nashville. In his remarks, he said Sugihara’s actions have been an inspiration to him.
“He chose humanity over career and the regulations of his government,” Abe said.
This year’s kindlers of the remembrance candles           were Jeff Jamner, Linda Klein, Thelma and Shari Marx, and Janet Jakubowicz, all family of survivors; Dan Penner, Shannon Kederis and Fred Whittaker, area school teachers of Holocaust history; Dan Streit, a refugee from Nazi Germany; Fred Gross, a survivor; Milrod and Abe.
Rabbi Stan Miles, outgoing chair of the Jewish Community Relations Council, who opened the program, said events such as Yom HaShoah are critical, especially today, “to bring light to a frightened and darkened world.”
Rabbis Joe Rooks Rapport and Bob Slosberg, plus teens from area schools, also took part in the ceremony.
Cantor Sharon Hordes sang Bessame Mucho; Jamner and violinist Sara Callaway performed a dramatic reading-music rendition of “Juliek’s Violin,” which is taken from Elie Wiesel’s Night; Cantor David Lipp chanted El Maleh Rachamim and Gross led a Holocaust-specific responsive reading of the Mourner’s Kaddish, in which the audience answered each line with the name of a place where the Holocaust, and more recent acts of genocide, took place.
Rabbi Michael Wolk, who introduced that reading, which is used in the Conservative machzor, said the Holocaust “needs its own unique liturgy” to perpetuate its memory.
In closing, Rabbi Beth Jacowitz Chottiner quantified the impact of Sugihara’s action during the war. “It allowed 40,000 descendants of the visa recipients to come into the world,” she said.
Years after the war, when asked in an interview why he did it, Sugihara said, “In life do what’s right  because it’s right, and leave it alone – no ulterior motive, don’t make money from it, don’t write an article about, don’t publicize it. Do what’s right because it’s right.”
Jacowitz Chottiner asked everyone in the sanctuary to “live according to the values that guided the remarkable life of Chiune Sugihara.”