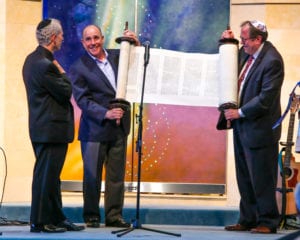 William Yarmuth and Rabbi Robert Slosberg present Cantor David Lipp with a newly written Torah, which was commissioned to celebrate his 25 years at Adath Jeshurun. The presentation was made at the May 22 Captivating Cantors Concert, the climax of the 72nd Cantors Assembly Convention, which was held in Louisville. Lipp was installed as its president. (Community photo by Jessica Budnick)

Prior to the May 22 concert at Adath Jeshurun featuring 130 cantors, Cantor David Lipp opened the ark in the main sanctuary and removed a Torah.
As the incoming president of the Cantor’s Assembly, Lipp had to make room in the ark for a symbol of his office – a small Holocaust Torah that would be presented to him during the concert. That meant another Torah had to be transferred to the chapel, making room in the ark.
Fortunately, for Lipp, he selected the right Torah.
Unbeknownst the cantor, he would not be receiving one Torah that night, but two. Desiring to honor Lipp for his 25 years of service to the congregation, Rabbi Robert Slosberg, on behalf of AJ, had commissioned a new Torah, which was hidden under a cover presented to Lipp five years earlier during the renovation of the building.
William and Susan Yarmuth sponsored the scroll.
“He (Lipp) has been a uniter of people” said William Yarmuth, who presented the new Torah, “someone who brings everyone together.”
Slossberg recounted he went to New York 25 years ago to call in a favor from the then-chancellor of the Jewish Theological Seminary, Ismar Schorsch, and ask for his help in finding the right cantor to succeed Marshall Portnoy. Schorsch recommended Lipp. He was right, Slosberg said, calling his pastoral colleague, “a cantor’s cantor.” Understandably, Lipp was surprised by the presentation. “I can’t think of a higher honor,” he said. “I’m overwhelmed, and I’m blabbering because I’m speechless.”
Later in the program, the second Torah – the one Lipp did expect – arrived when the outgoing CA president, Cantor Alisa Pomerantz-Boro, marched it down the aisle to the bima. It will reside in the AJ ark for the next two years – then length of Lipp’s term as president.
By the way, there was really music at this concert. In fact, it was a rare, if not unprecedented, display for Jewish Louisville of the virtuosity of the American cantorate.
Some of the performers commanded standing ovations, such as when Cantor Jack Mendelson and his son, Daniel, performed together a traditional cantorial chant of Acheinu Kol Beis Yisroel.
Cantor Sharon Hordes of Keneseth Israel, and her predecessor, Cantor Paula Pepperstone, opened the show by chanting Psalm 100:2.
Cantor Randy Herman, the star of this year’s AJ Music Festival, riffed on the piano as he sang an upbeat tune he composed, Yofi Tofi Mucho Beseder.
Cantor Alberto Mizrahi performed a Sephardic version L’cha Dodi as he banged away on a drum.
And all the cantors stood and ringed the sanctuary for a Kululam-inspired performance of Naomi Shemer’s Lu Y’hi (Let it Be).
The concert ended with an Abayudaya rendition of the Shema. The CA had sent a delegation to Uganda in February to show solidarity with the Jews there, who have struggled for recognition from religious leaders in Israel.