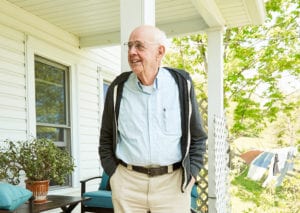 Kentucky poet Wendell Berry, pictured here at his farmhouse in Henry County, is this year’s recipient of the Blanche B. Ottenheimer Award. Berry has spent a lifetime championing conservation, human rights and the agrarian way of life through his writings and activism. (Community photo by Jessica Budnick)

Wendell Berry – poet, novelist, essayist, conservationist – sat on his porch in Henry County, the birds chirping as he described how he has lost his fights to preserve the agrarian way of life.
Appalled by strip mining and mountaintop removal, the use of toxic herbicides on farmland and the systemic destruction of rural communities, Berry has spent his adult life pushing back against these trends.
All for naught.
“My daddy had raised me in the belief that a grass sod was the greatest thing on earth, because it protected the land,” Berry said, pointing to the hillside meadow surrounding his white frame farmhouse. “What you see out there was a kind of ideal to me – the land, well covered and protected.”
So when he first saw a strip mine, a bulldozer “pushing the whole plant community over the hillside as of no worth,” it enraged him.
“I’ve had it in me ever since, and have done everything I could to stop it really … and have lost completely.”
Did he really believe that?
“It went on and got worse in spite of all anybody could do,” Berry said. “Yeah, I believe it. The score’s 100 to nothing.”
But Berry’s ideas, which are reflected in his poetry, have been heard. President Barack Obama presented him the National Humanities Medal in 2011 during a White House ceremony.
And on June 5, he will receive the highest honor Jewish Louisville can bestow: the Blanche B. Ottenheimer Award, which recognizes outstanding work in political reform, youth education or elimination of prejudice and misunderstanding.
Turney Berry (no relation), a Louisville attorney and member of the nominating committee who put up Berry’s name for the award, said the famous poet lives the values for which he’s worked.
“I think Wendell’s proposition is, you can march (protest), but what you really need to do is embody important values,” Turney said. “To my mind, that’s what he’s done through his writing and his speaking, and his farming, and his living.”
Berry, 84, left Kentucky as a young man. He took a fellowship at Stanford University, then moved with his wife, Tanya, to New York, where he taught at the Bronx campus of New York University.
“I had swallowed completely the idea that to amount to anything, a boy would have to leave a place like this,” he said.
But he returned home when the University of Kentucky, his alma mater, offered him a teaching position in 1965. The couple bought a farm in Henry County, the same county where Berry’s family has lived and farmed for at least five generations.
They’re still there.
“I think I prepared myself to come home by my writing. I think I felt it as a vocation.”
In the half century since his return, Berry has become an outspoken defender of human rights and conservation, and a critic of harmful government policies. He spoke out against the war in Vietnam; protested construction of a nuclear power plant in Indiana; joined a human blockade of a coal-fired power plant in Washington, D.C.; and spoke out against capital punishment and the resurgence of racism since Obama’s election.
But no issue is closer to Berry than what he sees as the destruction of farm life and the mistreatment of the land.
“We’re dependent on toxic chemicals,” he said. “How we would relieve ourselves of that dependence would be a very complex matter … we’re dependent on tons of it scattered over the countryside.”
The Kentucky River, which flows by his farm, once had many black willow trees along its banks, Berry said. Now, they’re gone. Likewise, muskrats have disappeared from the woods.
“All this has to do with the health of nature,” he said. “These are very bad symptoms.”
But the land can’t be sustained without a stable population living on it, Berry said, and farm communities have been depleted for decades by industrialization and what he sees as a government-pushed idea that there are too many farmers.
“The Census Bureau quit counting farmers years ago,” he said. “They’re demographically insignificant.”
All of which has led to the breakup of the “intact rural community” with its own self-sustaining economy.
Years ago, “unless you needed a suit, you could buy everything you needed in Port Royal,” Berry recalled. Then, after World War II, industrialization drained the countryside of its people.
“It hasn’t stopped,” he said.
Berry has proffered ideas to deal with these issues.
Together with Wes Jackson, co-founder of the Land Institute, he proposed in a 2009 New York Times column that Congress pass a “50-year farm bill,” addressing soil erosion, overuse of toxic chemicals, dependency on fossil fuels and the destruction of farm communities.
“Civilizations have destroyed themselves by destroying their farmland,” he wrote.
But his biggest contribution to this cause is through his poetry, which is about the land, its people and the rhythms of nature.
A religious man, Berry’s has written pastoral poems, encompassing thoughts that have come to him over the years while walking in the woods on the Sabbath.
In fact, “Sabbaths” is the title of a major body of his work. He explores the idea of Sabbath in his poetry and takes comfort from knowing the world continues even when he stops for a day.
“That’s a rich idea, that the world continues,” Berry said, “then you devote some time to watching it continue.”