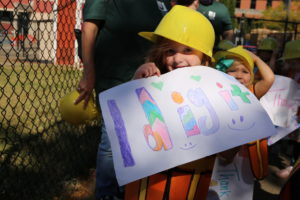 An Early Learning Center student holds up a sign saying “I dig it” at Thursday’s historic groundbreaking for the new JCC. (Community photos by Robbyn McClain)

Ralph Green’s sons used to spend countless hours at the Jewish Community Center playing sports, learning to swim, studying Hebrew and going to camp.
Perhaps their most memorable moment, though, was “a Jewish star made of people.”
Celebrating Israel’s 60th anniversary, Green recalled, dozens of people, his sons included, gathered on the lawn of the JCC to form the massive Star of David, an ancient symbol of the Jews, while  cameras recorded the moment.
“That photograph still stands in our home,” Green said.
Green was one of six speakers at Thursday’s historic groundbreaking ceremony for the future JCC and campus, all of whom shared their own multi-generational memories of growing up at, or sending their own kids to, the center and how the place affected their lives. 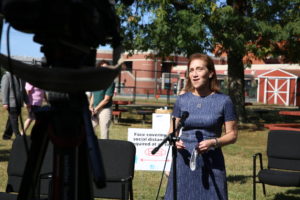 JCL President and CEO Sara Klein Wagner gives a TV interview prior to the ceremony.

“This place shaped the person I am today,” said Glenn Levine, chairman of Jewish Heritage Fund for Excellence (JHFE). “It allowed me to be the leader I am today and it instilled the Jewish values that I live by today.”
They all want future generations to make their own memories at the new J, which is why they, and many others, have supported the project.
More than 150 people livestreamed Thursday’s groundbreaking for the $42.5 million project on Zoom while 30 others attended in person, sitting far apart and wearing facemasks stamped with the J’s “Our Community Our Future” slogan.
The new 107,000-square-foot center, which will be built to the rear of the Dutchmans Lane campus and  should be completed in 18 months, will include an indoor family aquatics center, health and wellness center and an expanded early learning childhood center.
“It is my fervent hope,” said Green, the co-chair of the Jewish Community of Louisville, “that many in the Jewish community who have drifted away from the J for various reasons will rejoin us now and participate in all that the new J will have to offer.”
While construction is just now starting, several phases of the project are already completed over the past two years: “charrettes” (planning sessions) to garner community ideas for the project, the design phase and the capital campaign, which surpassed its $40-million goal during the leadership phase of giving. 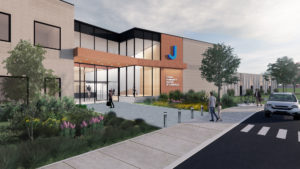 An artist’s rendering of the future JCC

A second phase of the campaign, this one for the general public is happening now, the goal being to raise the remaining $2.5 million needed to complete construction.
To that end, Sara Klein Wagner, president and CEO of the Jewish Community of Louisville, announced during the ceremony that the Louise and Clarence Judah Family Fund has made a $450,000 matching grant to encourage donations from the greater Louisville community.
“Louise and Clarence were pillars of the community,” Wagner said, “and through their generosity, we have a $450,000 match grant that we’re going to take forward to the community.”
Jon Fleischaker, also a JCL co-chair, who will step down this year after 3½ years in the position, said the board members had to answer several questions about the project before the groundbreaking could happen, including where to build it, when, and how big to make it.
They decided to “go big,” he said, and to keep the center on Dutchmans Lane.
He also said the purchase of the neighboring Anshei Sfard building will play a major role in the scope of the project, which includes not only construction of the center, but development of the entire campus.
“We thought it was very important – very important – to maintain that property within our Jewish community,” Fleischaker said. “As a result of that, we now have 31 contiguous acres that are here in a terrific location to serve not just the Jewish community, but the entire community.” 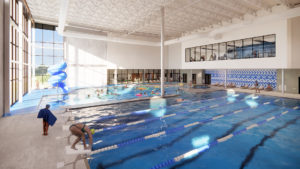 The new JCC will boast a state-of-the art aquatics center.

Levine, who represented the JHFE at the ceremony, said his organization’s financial support for the project – a $10 million lead grant and a $15 million matching grant – constituted the “the largest gift we ever made in our history.”
Steve Trager, chairman and CEO of Republic Bancorp, whose family’s $1.5 million donation kicked off the project, said they have many opportunities to support the community – few as important as this one.
“This one was an easy one to jump on board immediately,” he said, adding, “we are very proud to be part of this.”
Highlights of the ceremony included children from the Pomegranate and Sunflower classes of the Early Learning Center, decked out in workmen’s vests and hardhats, waving handmade signs saying “Thank you,” “I Dig it” and “Build this!”
The speakers and other dignitaries also took turns  turning soil in two wood boxes with gold shovels. Behind them, from the construction site, clanging sounds of earth movers and dump truck gates slamming shut reminded the crowd that work on the center is well underway.
The speakers paid tribute to the staff and donors for getting the JCC project to this day, specifically Wagner, Vice President of Philanthropy Stacy Gordon-Funk and Vice President of Operations Tom Wissinger.
Rabbi Beth Jacowitz Chottiner, who represents Board of Rabbis and Cantors on the JCL board, called the groundbreaking a moment of “continuity of serving the community.”
“We stand on the ground that will become our new ‘place,’” she said. “In Hebrew, the word for place is makom. It is one of our many names for G-d.”

By Lee Chottiner Community Editor I lift my eyes to the mountains; from where will my help come? My help comes from the Lord, maker of heaven and earth. — Psalm 121 One day in July, Cantor David Lipp walked …