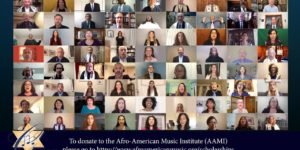 A screenshot from the Voices for Change video

I lift my eyes to the mountains; from where will my help come? My help comes from the Lord, maker of heaven and earth.
— Psalm 121

One day in July, Cantor David Lipp walked into the Adath Jeshurun synagogue to be part of a choral performance.
Standing in the sanctuary, dressed as he normally does during the work week, he set his phone on a tripod. Then, listening through his earphones to a recording of Richard Smallwood’s religious anthem, Total Praise, he proceeded to sing his contribution to the composition.
“I think I had to record it two or three times to get it right,” Lipp said.
He wasn’t alone. Some 100 other cantors and black “music ministers” did the same in their synagogues, churches and homes across the United States, Canada, Uruguay and Israel, coming together on a single musical composition that they hope will promote peace through harmony at a time when the world surely needs it.
It might be the first time that black and Jewish religious vocalists have come together on such a project, but it probably won’t be the last.
The video, called Voices for Change, was released shortly after Yom Kippur. A project of the Cantors Assembly (CA), it consists of the four-minute video recording of Total Praise and a 21-minute dialogue between Rabbi-Cantor Jeffrey Myers of the Tree of Life*Or L’Simcha synagogue in Pittsburgh and Pastor Eric Manning of the Emanuel AME “Mother Emanuel” Church, in Charleston, South Carolina – two houses of worships that were infamously and violently attacked by right-wing gunmen.
The four-month project, which included fundraising, obtaining recording rights to the music, production and engineering, was a direct response to the murder of George Floyd by a Minneapolis police officer earlier this year, touching off months of angry protests around the world.
“In this really toxic time, we wanted to put out something that was, at least from our perspective, just a real positive statement, a real positive kind of gesture of love and partnership,” said Lipp, the current president of the CA. “We wanted to create the possibility for deeper relationships and partnerships.”
The video, which was made by Stormport Productions in Israel, is a deceptively complex piece. Each singer sang Total Praise individually – in the same key, at the same tempo – then sent their video recording to Stormport for syncing. Meanwhile, working from a story board, the engineers and graphic designers created a fluid video, in which each singer appears to be floating three-dimensionally across the screen until they all come together as an actually choir, symbolizing unity.
The architect of the project was Cantor Alisa Pomerantz-Boro, immediate past president of the CA, and hazzan of Congregation Beth El in Voorhees, New Jersey, who was deeply affected by the George Floyd murder.
“I thought, ‘Boy! Jews and blacks, we’re getting a bad rap,” Pomerantz-Boro said. “Our world is a mess and we need to come together and show a message of unity and solidarity and equality, and that we love each and respect other, because I just can’t sit idly by anymore.”
Originally scheduled for release on Aug. 20, the date on which the first slaves arrived in America in 1619, the release date had to be pushed back due to production delays. Instead, the video came out after Yom Kippur.
Pomerantz-Boro called its reception “phenomenal.”
“I have had people reaching out to me saying, ‘This is the first thing in seven months of quarantine that has made me feel hopeful,’” she said.
Myers, of Tree of Life*Or L’Simcha, said the effort and presentation behind the project “stands alone as an important message at a time when we need positive messaging.”
He said he holds the media responsible for too much negativity, saying it is out of balance with positive actions like Voices for Change.
“Our music unites us,” Myers said.
Already a popular hymn in black churches, the CA selected Total Praise, which is based on Psalm 121, because of its message and its meaning to both communities, Pomerantz-Boro said.
“I think that’s really powerful. I think we need something to hold on to during this traumatic time in our world. I lift my eyes up the mountains; where am I going to get help? Oh yeah! You got that inside you, you got God inside you.”
Smallwood is a Grammy Award-winning gospel artist. In addition to Total Praise, he has written other well-known pieces, including I Love the Lord, which Whitney Houston sang in the movie, The Preacher’s Wife.
Voices for Change was funded through a $7,500 grant from the Cantors Assembly Foundation.
According to the CA, the video is believed to be the first time that Jewish and black “music ministers” have come together for a collaborative video production, though Myers said he couldn’t personally confirm that.
He did say that the video is the latest in a long history of cooperation and collaboration between blacks and Jews
“It’s a continuum of the relationship that the Jewish community and the black community have had going back a very long time, and this is just another piece of that relationship that continues to grow.”
Pomerantz-Boro expects the video to inspire sequels. She said a PR firm is already planning a possible male (memorial) production for the victims of COVID-19, and collaborative projects could take place with the Pittsburgh-based Afro-American Music Institute, a school for young black people to study music and its black cultural influence.
“This is not a one-and-done,” she said.

Want to help?
The Cantors Assembly and black prayer leaders have designated a scholarship program, the Afro-American Music Institute, as the official charity of Voices for Change. For more information, visit afroamericanmusic.org/scholarships. Also, visit cantors.org/voicesforchange to watch Voices for Change.