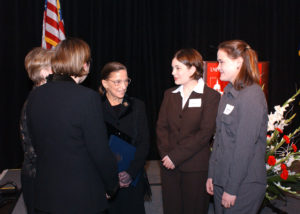 Supreme Court Justice Ruth Bader Ginsburg shares a moment with students and faculty from the Louis D. Brandeis School of Law at UofL the night of her speech at the Louis D. Brandeis Lecture at the Seelbach Hotel, Feb. 11, 2003. Ginsburg used her speech to discuss the history of Jews on the Supreme Court and how the so-called “Jewish seat” evolved over the years. (photo by Tom Fougerousse/University of Louisville)

When Ruth Bader Ginsburg visited Louisville in 2003 to speak at the Annual Louis D. Brandeis Lecture, it was probably the toughest ticket in town.
Some 700 people were crammed into a hall at the Seelbach Hotel downtown – lawyers, students, professors, the Jewish community (in force), and descendants of Brandeis – all anxious to hear from the diminutive Supreme Court justice.
But Laura Rothstein, then-dean of the Louis D. Brandeis School of Law at the University of Louisville, recalled that Ginsburg “insisted” upon a slight change to the program before it began.
“She insisted that the dinner not be served before her speech,” Rothstein said. The jurist thought that speaking while guests finished their meals or as waiters cleared away dishes, glasses and forks would be too distracting.
She was right.
“It was wonderful,” Rothstein said of the speech. “From then on, we always did it that way.”
The story typified Ginsburg, who died Saturday, Sept. 19, after 27 years on the bench. The justice was always precise and deliberative, especially with her words.
“What you’re always struck by was just how diminutive she was and how much power she had in her voice and language,” said David Friedman, former general counsel of ACLU Kentucky, who also was at the dinner. “She was petite, and she came across so strong.”
Her remarks that night were very Jewish, literally tracing the history of Jews on the highest court in the land.
Ginsburg described how the first Jewish Supreme Court Justice almost wasn’t Brandeis. President Millard Fillmore nominated Judah P. Benjamin, then a Louisiana senator, in 1853, but Benjamin, who would join the Confederate Cabinet during the Civil War, declined.
That paved the way for Brandeis, whom President Woodrow Wilson nominated in 1916, followed by Benjamin Cardozo, Felix Frankfurter, Arthur Goldberg, Abe Fortas, Ginsburg, Stephen Breyer and Elena Kagan.
Even if some of those justices were nominated because they were Jews, Ginsburg said the court has evolved over the years, from a body where a so-called “Jewish seat” existed to one where Jewish jurists were nominated less for their ethnicity and more for their merits.
In her case, and Breyer’s, both nominated by President Bill Clinton in 1993 and 1994 respectively, each had taught law for several years and served on federal courts of appeals before moving up to the high court.
“In contrast to Frankfurter, Goldberg and Fortas … no one regarded Ginsburg and Breyer as filling a Jewish seat,” Ginsburg said in her speech. “Both of us take pride in, and draw strength from, our heritage, but our religion simply was not relevant to President Clinton’s appointments.”
Nevertheless, Ginsburg told her audience, she drew inspiration from Jewish teachings. She said artwork adorning her chambers bore the Jewish commandment, “Zedek, zedek.” (Justice, justice shalt thou pursue.)
“They are ever-present reminders of what judges must do ‘that they may thrive,’” she said.
While Rothstein described the speech as “very Jewish,” she also thought Ginsburg made a cogent point about what the court ought to be.
“It also focused on a legal issue, which was the role of the courts,” she said. “I think we’re seeing that now: is the role of the courts to be representative of people in the country?”
Friedman experienced firsthand how Ginsburg worked on the bench when he argued a civil liberties case before the Supreme Court in 2005, ACLU of Kentucky v. McCreary County et al. He argued that displays of the Ten Commandments at two Kentucky courthouses violated the Establishment Clause of the First Amendment.
“She was very quick and very precise, and of course she had a beautiful Brooklyn Jewish accent,” quipped Friedman, a native of Queens.
But Rothstein will always remember Ginsburg as a breaker of glass ceilings, particularly as a law professor at a time when law schools had so few women on their faculties.
“I really credit her for blazing trails in academia,” she said, “which she’s not well known for, except in academia.”
Shadowing today’s turbulent times, Ginsburg took a moment to laud Brandeis for the Louisville native’s approach the law.
“Law as protector of the oppressed, the poor, the minority, the loner is evident in the life body work of Justice Brandeis,” Ginsburg said.
Those words could easily be written about Ginsburg today, Rothstein said. “That’s particularly poignant to see those connections, especially right now.”