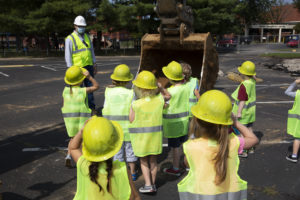 Children from the Jewish Community Center’s Early Learning Center get a sneak peek at the construction site for the future JCC during a recent field trip. The virtual groundbreaking for the JCC will be held on Oct. 8, with construction expected to take 20 months to complete. Visit jewishlouisville.org/groundbreaking for more information. (Community photo

After two years of raising money to build the new Jewish Community Center, one thing has definitely stuck with Jerry Abramson: People were almost unanimously willing to give.
“We have made an enormous number of calls and had face-to-face meetings,” the capital campaign co-chair said, “and most everyone has been honored to be asked to give to the project.”
Abramson says that the co-chairs of the capital campaign committee, including Madeline Abramson, Frank and Barbara Weisberg and Dr. Jeffrey Tuvlin, agree with the sentiment.
On October 8’s virtual groundbreaking, every individual, family and foundation that stepped up during the leadership phase of the fundraising campaign will see the long- anticipated, ceremonial groundbreaking for the Louisville JCC of the 21st century.
“We are going to make it personal and heartfelt, and we’ll have a few surprises along the way,” said Stacy Gordon-Funk, senior vice president of philanthropy and chief development officer at the Jewish Federation and JCC. “We are anxious to celebrate as broadly as we can, with the community, that we’ve achieved this first groundbreaking goal. I am eternally grateful to those who got us to this point”
Among the speakers for the historic event will be Jon Fleischaker and Ralph Green, co-chairs of the Jewish Community of Louisville board of directors; Sara Klein Wagner, president and CEO of the JCL; Glenn Levine, board chair of the Jewish Heritage Fund for Excellence and Steve Trager, CEO of Republic Bancorp and a major supporter of the project.
During the leadership phase, “We spent an enormous amount of time presenting, submitting grant requests and having coffees, breakfasts, lunches with potential donors,” Abramson said. “We carried the message that was probably very similar to the one carried 60-odd years ago,” when the current JCC was built.
“But more work remains” Gordon-Funk said. “We are inviting the entire community in to get involved.”
Contributions will still be needed to complete the project, which includes construction, demolition of the current JCC and Anshei Sfard buildings, “greening” of the campus, building a new entrance at the four-way Dutchmans Lane-Cannons Lane intersection and other campus needs.
Which is why, according to Abramson, the groundbreaking ceremony will mark the end of one campaign phase – the leadership phase – and the start of another – the community phase.
“During the community phase, everyone has the opportunity to contribute any amount to show their commitment to this once-in-a-lifetime project,” Abramson said.
The construction of the new JCC, which should take approximately 20 months to complete, will be done in five phases, one of which has already started: site preparation, foundation and steel erection, exterior cladding (prefab concrete walls, windows, roof), interior work (flooring, masonry, drywall, wiring, plumbing) and moving (taking equipment, supplies and furnishings from the old building to the new).
Finally, “opening day,” said Laurence Nibur, chair of the construction committee. “We will look forward to welcoming the entire community to our new JCC home.”
He said the most “visible” moment to the public may be phase 2, which is expected to begin this winter. People will begin to see the steel superstructure rise from the back of the campus like an Erector set.
“They’ll see the building take shape,” Nibur said, “the literal skeleton of the building.”
Serving as the board’s liaison to GBBN Architects and the contractor, Calhoun Construction, Nibur said his volunteer job will continue throughout the project. Along with senior leadership, Nibur joins a series of owner-contractor meetings to regularly monitor checklists and make decisions as they arise.
The work that has started, Abramson noted, could not have happened without the Jewish Heritage Fund for Excellence, as they were the lead partner with the JCL to create a transformational project.
“There is no question that because of the cornerstone gift of the JHFE and their willingness to match us dollar for dollar, the community believed this would happen,” Abramson said.
He also cited the contribution of the James Graham Brown Foundation, the Gheens Foundation, Kosair Charities and the WHAS Crusade for Children, all of which have supported the project.
“Many of the donors and contributors, who I spoke with, gave because of the impact that the JCC had on their lives and wonderful memories of growing up at the JCC,” said Abramson. They also gave because they know the importance for their children and grandchildren to have a Jewish Community Center for them to enjoy in the future.”
Abramson continued, “This is now the Jewish icon that the community at large thinks of when they think of the Jewish community.”
To get involved, please contact Stacy Gordon-Funk at Sgordon-funk@jewishlouisville.org or (502) 608-6519.