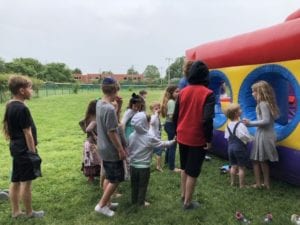 Kids raced through an inflatable slide near the J Pavilion during the annual Yom Haatzmaut Family Festival.

While millions of Americans are preparing for Memorial Day at the end of May, and Independence Day at the beginning of July, many American Jews have already celebrated those holidays, sort of.
On May 19, The J held its annual fun-filled Yom Haatzmaut Family Festival. Children and adults enjoyed games, music, crafts, stories and, of course, food – all in celebration of Israel’s independence day.
Michael Fraade, of the Jewish Outdoor Food Farming & Environmental Education (JOFEE) director, helped organize the event.
“At The [J] we try to do something every year to celebrate the holiday,” Fraade said. “This is one of the times of the year where I reflect on what Israel was founded on: Jewish and political independence.”
Fraade and Youth Program Manager Katelyn Graves spent two months planning, preparing and putting the festival together.
“This event is community-centered,” Graves said. “We want everyone to come in and have fun, see their own community, and learn a bit about Israel.” 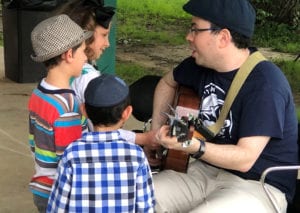 Learning more about the Jewish state is something many Israelis wish their American counterparts would embrace.
“Because I grew up in Israel, it is an important day for me,” said Rivka Admony. “If you grow up there, you are especially proud to be Jewish. You go to all these events, and everybody wears blue and white. It doesn’t matter what your background is. We feel as one.”
Unlike the United States, where Memorial Day and Independence Day fall about a little more than month apart, in Israel, the two holidays fall on consecutive days, with one flowing into the other. Yom Hazikaron (Day of Remembrance) commemorates fallen soldiers, comrades and family members. But with sundown, the country’s somber commemoration gives way to the jubilation of Yom Haatzmaut (Day of Independence).
“We get up on our feet and are happy that we are independent Jews and an independent state,” Admony said.
Israel’s independence day is celebrated on the fifth day of the Hebrew month of Iyar. The original date, May 14, 1948, means Jews are celebrating Israel’s 71st year of Independence this year.
That is something Jerusalem-born Ronen Danino takes pride in. “This holiday is a testament of how far we have come as a Jewish people,” he said. “Seventy-one years, to see what we have accomplished, is nothing short of a miracle. So, we take this holiday very personally. We experience this holiday on a very personal level, but what I’d like to see is Jews in America embrace this holiday a little more.”