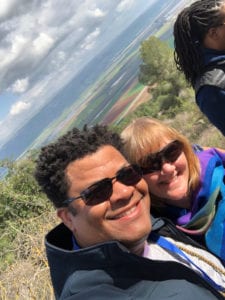 Before he left for Israel, much of what Kendall Boyd knew about the country came from Jimmy Carter’s controversial book, Palestine: Peace, not Apartheid.
“He brought to my attention a lot of how this conflict came about,” Boyd said of Carter’s book. “There are so many complexities to the Israeli state.”
But this trip was different, he said.
Boyd came face-to-face with Israel: the multicultural society, how it struggles with refugee migration and the influence of high-tech innovation on the country.
“My mind was wide open on expectations,” he said. “I intentionally didn’t really go deep into the agenda; I wanted to let things kind of flow to me.”
Boyd, executive director of the Louisville Metro Human Relations Commission, joined Matt Goldberg, director of the Jewish Community Relations Council, on a seven-day mission to the western Galilee from Feb. 16 to 24, sponsored by Partnership2Together. He was one of 11 non-Jewish officials from U.S. cities who participated in the mission.
“It was like I was experiencing Israel for the first time with him,” Goldberg said of his trip with Boyd. “He got to see Israel in all its complexities, real personal encounters with all different kinds of Israelis, and an understanding of the unique security challenges that Israel faces.”
Sharon Chait, director of Partnership2Gether, said the idea for the trip, which was financed by Israelis, not Americans, came last year after Israeli leaders visiting Indianapolis and Omaha were troubled by BDS (Boycott Divestment Sanctions) efforts to delegitimize their country in the eyes of American “opinion leaders.”
“They came back to Israel and realized the best way to help is to bring non-Jewish community opinion leaders [to Israel],” Chait said. “It was really meant to support Jewish federations that suffer from anti-Semitism and BDS, and they felt this is how to do it.”
Boyd, who oversees the city agency that addresses and investigates cases of bigotry, bias and discrimination, found his Israel experience “eye-opening.”
He visited a hospital that treats wounded Syrians from the civil war across the border (and whose chief physician is an Arab-Christian).
He toured state-of-art manufacturing facilities in Akko.
He met Arab Israelis, who talked openly about being a minority in the Jewish state.
Boyd quoted one Israeli Arab who explained how he struck a balance in his life. “He said, ‘I’m Arabic and I’m not Jewish. As long as I remain one or both it will technically never be equal in Israel. We can disagree on everything, but I must wake up the next day and work next to my Jewish counterparts.’”
Chait said P2G wanted the group to hear from Arab Israelis.
“We said from the beginning we’re not going to hold anything back,” she said. “We’re going to put all this stuff on the table. Ask tough questions, don’t worry how we feel.”
Alongside multicultural issues. Chait said P2G wanted to show the visitors the progress of Israel has made as a start-up nation and high-tech power.
The group toured one manufacturing plant that produces the camera pill, a vitamin-size wireless camera that can be swallowed, taking thousands of pictures as it travels through the digestive tract.
And it visited the Museum of Innovation in Tel Aviv, where Boyd saw a prototype for a device that creates drinking water from moisture in the air.
“Who doesn’t know a country on this earth that needs that?” Boyd asked. “Here in the United States, the people in Flint could use something like that.”
What resonated most with him were his meetings with Ethiopian Jews and what he learned about African migrants to Israel. He said there were important parallels between the refugee issues there and in the United States.
“What benefit do we get by rounding people up and sending them back to where they came from?” “What’s the cost analysis there once you do that and get rid of them? What’s the win there? Who wins there? Nobody,” said Boyd, who is black.
The story is the same in Israel.
Boyd said he asked people he met how Israelis perceive African Americans. “Ironically, they didn’t have a lot of questions about who I was. Everyone I talked to was open minded, free and clear of racism and not judging people by the way they looked.”
While he learned a lot on the trip, Boyd also taught a thing or two to his hosts.
He introduced the term “implicit bias,” which he said is not well known there. It refers to judgments of individuals based on stereotypes, rather than getting to know people as individuals.
Finally, in Jerusalem, a holy city to three religions, Boyd said their differences seemed to disappear on the Sabbath.
“All the things that separate us in the world, in that one moment, like when we were all at the Western Wall, all that disappears,” he said. “I never saw that happen before.”