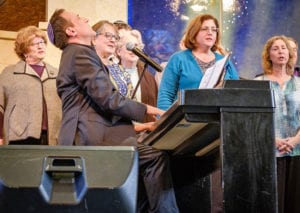 Cantor Randy Herman of Bet Torah in Mount Kisco, New York, performed at last year’s AJ Music Festival. The 2020 festival has been postponed due to the coronavirus outbreak. (photo by Jerry Wolff)

(Editor’s note: This is a developing story that will be updated as news warrants.)

Since 1972, the Adath Jeshurun Music Festival, Jewish Louisville’s largest singing and performing  arts event, drawing cantors, soloists and singing groups from around the country, has never been postponed.
Until this year.
AJ called off the festival, slated for Sunday, March 15, as part of Gov. Andy Beshear’s call to faith groups to help check the spread of the coronavirus.
It’s an unprecedent step, and Cantor David Lipp, who organizes the event, feels “terrible” about it.
But it couldn’t be helped.
“When the governor says that we shouldn’t be having services in places of worship,” the cantor said, “we felt that this would force us to also cancel a much larger event that could lead to the infection of many more people than we might cause on a Shabbat morning.”
AJ, which will reschedule the music festival, will also work with ticket holders and sponsors to apply their payments to the new date or refund them altogether.
Although the music festival is the largest event in Jewish Louisville affected by the coronavirus pandemic to date (some 300 were signed up before the postponement), it is by no means the only one.
Jewish Louisville is being hard hit by the outbreak. Worship services, fundraisers and senior outings are being canceled, In-person meetings are going virtual, rest homes are limiting visitors (clergy including) and people are changing lifetime habits to meet the viral threat.
At Herman Meyer & Son Funeral Home, guests are being asked not to hug or shake hands with mourners.
And as the community adjusts to the virus, the unanswered questions are, How long will this last? What other aspects of Jewish life might be affected?

In response to Beshear’s request, three synagogues – Adath Jeshurun, Keneseth Israel, Temple Shalom – canceled Shabbat services and Sunday minyans the weekend of March 15.
The Temple and Anshei Sfard did hold services, but it was not business as usual, with the Temple moving to the main sanctuary so worshippers could spread out. And Anshei Sfard Rabbi Simcha Snaid told his congregants that it was “halachically forbidden” to come to synagogue if they had flu-like symptoms.
Rabbi Robert Slosberg, of AJ, said the Jewish community is especially vulnerable to the coronavirus.
“The Jewish population is pretty much the target population” of the coronavirus,” Slosberg said. “We’re disproportionately older, so we’re at greater risk.”
The Temple suggested that its members use its livestream option if they didn’t feel comfortable coming to services. Other synagogues said they were considering adopting a streaming option.
“We have been talking about doing it,” Slosberg said. “Now, there is a greater urgency.”

Beyond synagogues, the impact of coronavirus also is felt.
At the J, the annual Play Your Part fundraiser, which supports CenterStage’s Acting Out program, was cancelled and The Senior Center called off a program at the Derby Dinner Playhouse, but the Early Learning Center and the Health and Wellness facilities remain open, though fitness schedules could be altered.
“We are looking at programs on an individual basis,” said Tom Wissinger, vice president of JCC program and operations.
At the Jewish Family & Career Services, Chief Executive Officer Deb Frockt said her staff is offering services by phone and video chat. They have moved monthly support groups to a call-in conference format, providing extra training for staff who provide home care to seniors, and are preparing “emergency food and necessity packages” for the Meyer Food Pantry.
And the office will be closed from March 16 to 20.
JFCS will hold a weekly call-in conversation from the community, “Strategies for Managing Uncertain Times,” starting Monday, March 16, from noon to 1 p.m. Topics include tools for dealing with stress, reducing loneliness during isolation and self-care. Call Jessica at 502-452-6341, x153, to RSVP and for call-in instructions.
As the virus continues, Frockt said the agency is prepared for “some or all” of its staff to work remotely. Other Jewish agencies are making similar preparations.
“We know the impacts of the pandemic will be felt long after the virus is controlled, and JFCS will be here to respond to the needs of individuals, families and the community so we can recover and go forward together,” she said.

Jewish Louisville will have to wait a little longer to see the world premiere of a play based on the life of Rabbi Abraham Joshua Heschel. The Bunbury-ShPIeL Identity Theatre Project, which has been staging a series of Jewish-themed plays …