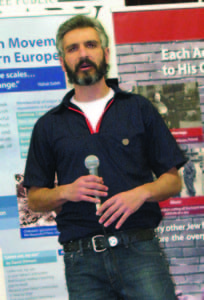 Throughout January and February, the Louisville Free Public Library has been offering a variety of Holocaust education opportunities. A display of Anne Frank family photos has been on display there since January 30. If you hurry, you can still catch it. The final day for the display is Saturday, February 27. The LFPL also offered a well-attended class facilitated by Holocaust educator Fred Whittaker.

Another unique offering brought two educators from Israel’s Akko Educators’ Kibbutz from the Dror Israel movement to Louisville on January 31. A project of the Partnership2Gether Arts and Community Task Force, Amit Briness and Ari Levy brought the Holocaust Day Project “Rebellion of Hope” to the library and guided attendees through it.

The project was designed for the Israeli docents to guide small groups through the exhibit, interacting with individuals, challenging them and encouraging them to think. However, more than 70 Louisvillians showed up that day, so Briness and Levy adapted their project and made a more formal presentation.

The exhibit weaves stories and questions into a constructive narrative of the Holocaust, while strengthening the memory of the Holocaust and its lessons in a way that challenges participants to examine their own thoughts and actions.

Briness and Levy discussed the wide variety of choices made by individuals and organizations during the Holocaust. They talked about the psychological assaults the Nazis used to reeducate the population. Food could be withheld, leading to violence and the acceptance that some people were not deserving of adequate food or humane treatment.

The different badges issued to prisoners in Auschwitz – yellow for jews, green for criminals, pink for gays, etc. – fostered a stratified status system, putting one group above another. This enabled the Nazi to post only five to 10 guards in prison camps where thousands were confined. The prisoners would guard other prisoners or even kill them to keep themselves alive.

Briness and Levy also covered the resistance movement and pockets of culture that survived even within the camps.

A number of the founding members of the Akko Educators’ Kibbutz were survivors of the resistance movement. “Antek was my favorite,” Levy said. “He was the oldest of the group.” Living in Warsaw, he was about 21 when the war broke out. As conditions in the ghetto worsened, he began doing things to resist. Sometimes it was as simple as refusing to remove his hat when a Nazi guard passed. Sometimes they didn’t notice; other times they beat him.

Then he begins making books about suffering and heroism throughout Jewish history. He began recruiting girls as couriers between the large Warsaw Ghetto and the smaller one. He started an illegal school to teach poetry, philosophy and history. Antek was also one of those who participated in the Warsaw Ghetto uprising.

It was out of the lessons learned from people like Antek that the Dror Israel came into being.

The exhibition was created by the Dror Israel movement and is guided by its experienced educators all over Israel. It has been translated and adapted to the needs of an English speaking audience. It is a project of the Akko Educators’ Kibbutz and is based on the values of democracy, peace, tikkun olam and shared existence.

Through Partnership2Gether, our Louisville Jewish community has been enriched with medical, educational and cultural exchanges since the program began in 1997. The Jewish Community of Louisville is a member of the Central Area Consortium of communities partnered with the Western Galilee.

The Shabbat prior to the publication of the next issue of community, March 18-19, is Shabbat Zachor, the Sabbath of Remembrance. Shabbat Zachor is always the Sabbath prior to Purim. We read Deuteronomy 25:17-19 as an extra section of Torah …

When you come to the Jewish Community Center for a CenterStage production, an art exhibit, a drawing class or a lecture, you know you can count on it being a high quality experience. Always looking to improve, the J is …

Imagine yourself standing in Red Square in Moscow or praying in the famous Marina Roscha Synagogue or touring the Kremlin. Imagine a festive meal the way millions of Jews might have celebrated in Russia over the past 500 years with …