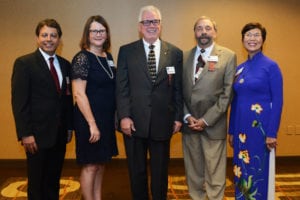 The 2017 MOSAIC Award honorees – all representing how newcomers to America can make good and give back to their adopted country – were recognized for their achievements Thursday, May 18, during a celebration at the Hyatt Downtown.

In what was billed as the largest MOSAIC Awards event to date (about 500 people were on hand), TARC Director Barry Barker, high-tech entrepreneur Vik Chadha, U of L gerontology specialist Dr. Annatjie Faul, Grammy-nominated composer John LaBarbera, and restaurant mogul CoCo Tran were each profiled, presented with original artwork, then given their chance at the microphone to thank those who helped them and add their own thoughts to the occasion.

“Jewish law commands us to welcome the stranger in our midst,” said Judy Freundlich Tiell, executive director of the Jewish Family & Career Services, in describing the motivation for presenting the awards. JFCS is the chief sponsor of the event.

Since 2006, The MOSAIC Awards have annually recognized a class of “international Americans” whose drive, creativity and entrepreneurial spirit have contributed to Louisville. Louisvillians from 32 countries, including two from Israel, have been honored.

Since JFCS’s founding 119 years ago, it has been its mission to provide services to newcomers to America, and to Louisville, establish themselves, and to succeed.

“This is the story of all people,” said Rabbi Joe Rooks Rapport, who led the invocation. “We are all travelers searching for a home.”

Among this year’s honorees:

• Barry Barker, from Great Britain, a leading public transit expert and director of TARC has contributed with the systems service innovations and “customer-centric services.” Under his leadership, Louisville’s transit authority has added hybrid and electric buses and increased its level of outside funding.

In accepting the award, Barker thanked Mayor Greg Fischer for declaring Louisville a compassionate city, saying such gestures “give folks like myself license to pursue the aspects of my business.”

• Vik Chadha, from India, has cofounded two successful technology companies – Backupify and GlowTouch – which collectively employ more than 1,300 people. He also played a role in creating the high-tech, co-working space, iHub, at U of L’s J.D. Nichols Campus.

Chadha, who is married to 2013 MOSAIC honoree Vidya Ravichandran, credited his parents for instilling in him the core values he needed to succeed, including finding the good in people.

He also credited persistence, saying he and his wife sent out 125 proposals for a business plan when starting out – and got 125 rejections – before someone took a chance on them.

• Annatjie Faul, from South Africa, left the country she loved in 2000 to seek more opportunities for her family. Today, she is the associate dean for academic affairs at the Kent School of Social Work, and executive director of the Institute for Sustainable Health & Optimal Aging of the U of L Health Sciences Center. She was recently awarded more than $2 million in grants to help primary physicians here better serve geriatric populations.

“We are blooming where we are planted,” Faul said of her family (her husband also teaches at U of L). “We are blooming because of the wonderful people we encountered upon our journey.”

• John La Barbera, of Sicilian descent, is a professor emeritus of music at U of L. Before that, though, he played jazz with some of the greatest performers of the genre – Buddy Rich, Woody Herman, Count Basie, Dizzy Gillespie and Mel Torme. He has composed jazz works that are considered standards, conducted symphony and chamber orchestras, and received two National Endowment for the Arts awards for jazz composition.

In his brief remarks, La Barbera said he was grateful to his father for immigrating before the U.S. government imposed quotas in 1924. Otherwise, he never would have had the opportunities of which he has taken advantage.

“My father is the one who deserves the award,” he said.

• CoCo Tran, from Vietnam, started her first restaurant in Saigon in 1968 (she was just 22). After fleeing her country in 1975 – one of the thousands of “Boat People” risking everything to reach America – she came to Louisville and was in introduced to fast food dining when she was taken to lunch at McDonalds. She went on to open the first Chinese fast food restaurant in the city, The Egg Roll Machine. Since then, she has opened nine bistros, employed many Vietnamese refugees and has mentored other Asian entrepreneurs.

She said she only opens vegetarian eateries because “I want people to be healthy.”

Like every year, this year’s MOSAIC awards were pieces of art uniquely designed for the occasion. Kentucky artist David Caudill created this year’s awards – a set of prints. He wrote the prints “offer opportunities to invent stories and to explore an unlimited field of imagination.”

Also during the ceremony, the 2017 Jeff & Phyllis Osbourn Scholarship recipient was announced. She is Edna Gyamfi of Ghana. A doctoral student in psychology at Spalding University, Gyamfi’s award is worth $1,000.

Before the program, young entrepreneurs showcased their businesses. JFCS is supporting them through its Navigate Enterprise Center, which provides information, training, one-on-one consulting and access to financing for low- and moderate-income entrepreneurs to launch and expand their own small businesses. 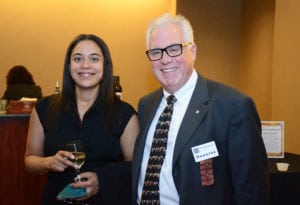 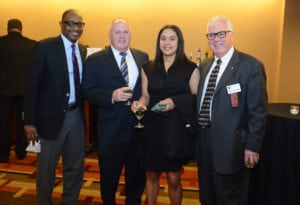 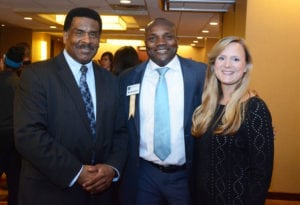 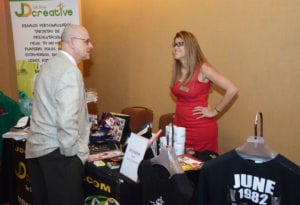 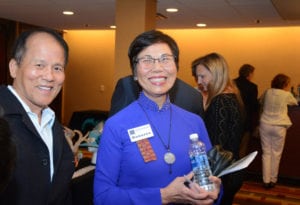 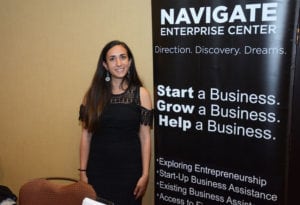 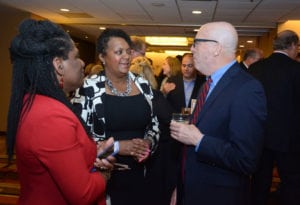 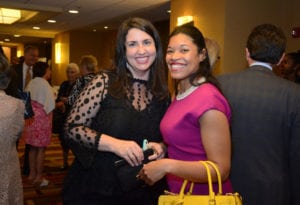 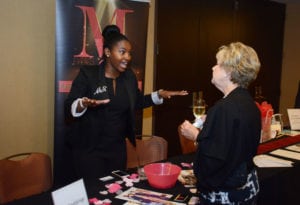 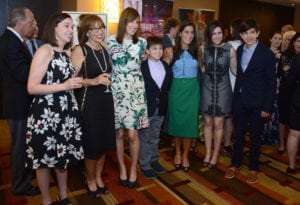 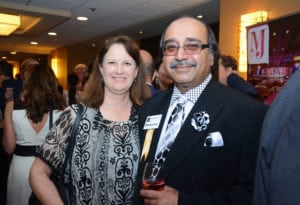 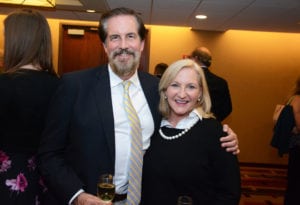 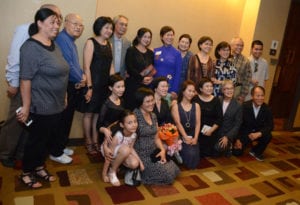 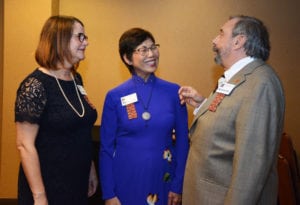 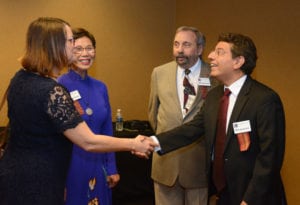 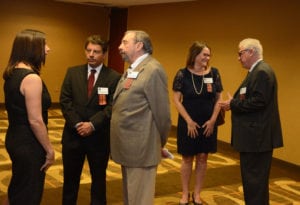 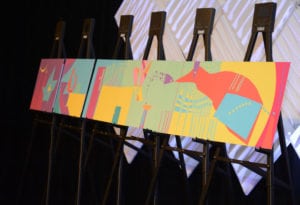 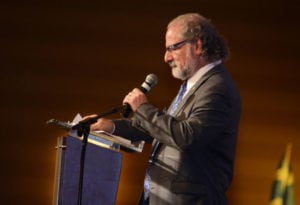 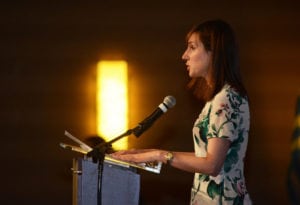 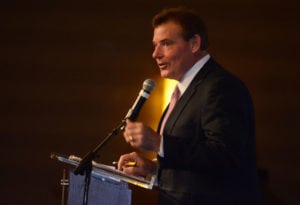 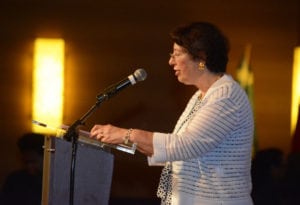 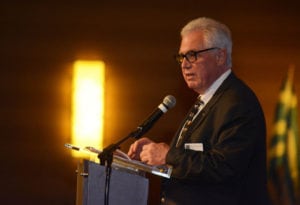 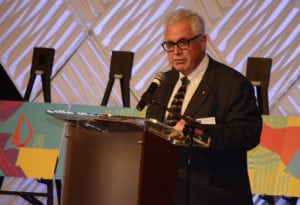 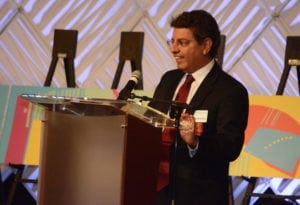 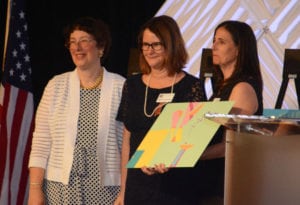 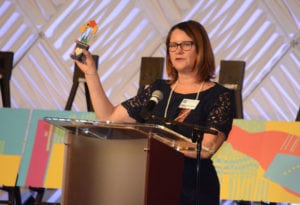 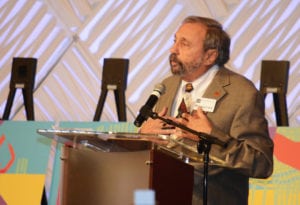 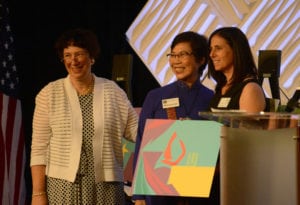 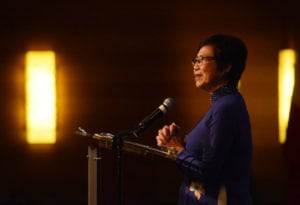 CenterStage’s 2017/18 Season has something for everyone and season tickets are on sale now! Cole Porter’s Kiss Me Kate starts off the season July 6-23 with “Another Op’nin’ Another Show” & “Brush Up Your Shakespeare!” CenterStage will once again be …

The J Early Learning Center graduated 14 students from the Pomegranate class at a ceremony on Monday, May 22. They were taught by Pomegranate Teachers: Jeanette Fisherman, Hope Curry and Donna Anderson. “A majority of the children have been here …