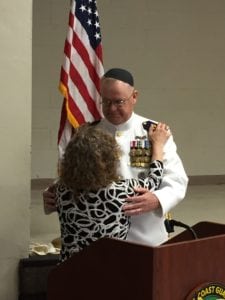 Like everyone on the morning of Sept. 11, 2001, BOSN James A. Todd was taken by surprise by the news of planes hitting the Twin Towers in New York City.

Unlike everyone, the veteran Coast Guard officer did something about it – fast.

“BOSN Todd was the first on-scene commander,” said one of his superior officers, Commander Molly Wike of the Coast Guard Sector Ohio Valley. “When Jim heard about the first plane hitting the Trade Center, he quickly called his crew back to the boat (USCGC Hawswer) and without orders went straight for the buildings, started rescuing people off the shoreline and established a security zone.

“BOSN and his crew selflessly aided the rescue of hundreds of people from Manhattan that day,” she added. (BOSN refers to the rank of chief warrant officer.)

While Wike recounted the story at Todd’s retirement ceremony, Friday, May 5, at the Fernwood Community Center, Todd, who was wrapping up a 30-year career in the service, didn’t even mention it when he spoke.

“It’s very hard for me to talk about,” he told Community.

Instead, Todd, who is Jewish, stood at the lectern in his dress white uniform and a kippa on his head, and emotionally recounted his favorite memories from a long Coast Guard career.

His eyesight failing, Todd made light of his condition, telling the 40-plus fellow servicemen, friends and family in attendance that he didn’t write a speech.

Instead, Todd spoke largely off the cuff, talking about how he, a kid from North Carolina, joined the Coast Guard in 1987, how he met his future wife Theresa, also a Coast Guard veteran, whom he calls his “Little Tsarina,” his graduation from college, the birth of his son, Joseph, and his promotion to chief warrant officer.

During his time in the Coast Guard, Todd has served on seven vessels; he was tasked with protecting the largest biomass of marine fisheries on the East Coast — the Elephant Trunk Access Area — and he served on the staff of Officer Candidate School at the U.S. Coast Guard Academy in New London, CT. There, Todd actually redesigned the curriculum for the Officer Candidate Indoctrination program.

But Wike also offered some examples of Todd’s personal side, like the time he gave a member of his crew a chocolate cigarette so he wouldn’t miss out on time with the crew   during smoke breaks.

“These subtle, but not small acts of guidance by BOSN over the last 30 years are the backbone of his service to the Coast Guard,” Wike said. “He has enriched the experience of those with whom he has served.”

Rabbi Beth Jacowitz Chottiner of Temple Shalom, where the Todds are members, delivered the invocation and benediction and offered Todd the priestly blessing. Several members of Temple Shalom, plus students of Louisville Jewish Day School, where Joseph attends, were on hand for the ceremony.

Todd has been assigned to Sector Ohio Valley since 2015. He and his family plan to remain in Louisville now that he is retired.

Julian “Pinky” Shapero knows a thing or two about Jewish Hospital. He should. He served on its board of trustees for 40 years, with a couple stints as its chairman. “I loved it,” he said. “I believed in the cause …

The Jewish Community of Louisville has hired Shayne Brill to be senior director of marketing, communication and engagement – a new position on the JCL staff. She will develop the JCC’s and Federation’s marketing and communications and oversee operations of …

At a time when LGBTQ rights are under fire in many states, Rabbi David Ariel-Joel believes the most vocal supporters of those rights – in Kentucky or anywhere – ought to be religious leaders.“Actually, religious leaders have a special duty …