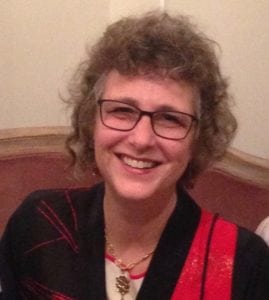 Rabbi Gaylia R. Rooks, a spiritual leader at The Temple for 29 years and the first female rabbi in Kentucky history, is retiring.

Though Rooks’ last day is officially June 30, 2018, she will be serving as a senior rabbi of the congregation until December 31. She will then spend the final six months of her contract on sabbatical.

“She, along with her partner rabbis, has been our spiritual leader and staunch community advocate for nearly three decades; beloved, respected and admired,” The Temple President Angeline Golden wrote in a letter to the congregation.

In a statement to Community, Rooks said, “It has been a tremendous honor and blessing to serve my congregation for the past 29 years and I will always be committed to The Temple. Obviously I will still be involved in my role as rabbi emerita and I will continue to cherish the privilege of sharing in the lives of our members for many years to come.”

The Temple will not fill Rooks’ position, Golden said in responses to questions emailed by Community.

“We are most grateful and honored that Rabbi David Ariel-Joel and Rabbi Joe Rooks Rapport (Rooks’ husband) will continue to lead The Temple as our two full-time rabbis,” she said. “They, along with The Temple leadership, have begun the deliberative process of ensuring a seamless transition in preparation for Rabbi Rooks’ retirement.”

Being the first female rabbi in Louisville was not an “unfamiliar” experience, Rooks told Community.

“I guess I was used to being the first,” she said. “I was the only woman in my rabbinical class on the L.A. campus of the Hebrew Union College and was one of the first 50 women to be ordained. My husband and I were the fifth rabbi-rabbi couple to be married and the first to go through all five years of seminary together.

“Regarding people’s reaction to me,” she continued. “I still stand by my comments of almost 30 years ago: While some people were concerned about having a woman rabbi, I think once I was here, they found the reality easier to deal with than they may have feared.

“I believe that for the most part, people respected me as a rabbi, a woman, and a partner with whom to work on the sacred task of tikkun olam,” Rooks added. “That goes for my Temple, the broader Jewish community, and the general interfaith community at large.”

The Temple is in the process of planning internal celebrations and a community-wide event to honor Rooks for her years of service to the congregation, according to Golden.

Rooks’ retirement wasn’t the only news involving the Temple’s rabbis. Golden also announced that Rapport has signed a retirement contract that will carry him through to June 30, 2022 when he, too, will join Rooks as rabbi emeritus.

And Ariel-Joel has signed a contract as senior administrative rabbi that extends through June 30, 2028.

“He, along with Rabbi Rapport, will be taking over Rabbi Rooks’ duties as we move into this new phase for our congregation,” Golden said in her letter to the congregation.

She said the leadership will speak more about the changes at The Temple’s annual meeting, which is slated for Thursday, June 2.

A graduate of Brandeis University and the Hebrew Union College in Cincinnati, where she was ordained in 1984, Rabbi Rooks came to The Temple in 1988, becoming the first female rabbi in the commonwealth.

Since then, Rabbis Laura Metzger, Nadia Siritsky and Beth Jacowitz Chottiner, and Cantor Sharon Hordes, have all followed Rooks to Kentucky. Also, The Temple and Temple Shalom have each employed several female student rabbis who were training for their careers after ordination.

During her time at The Temple, Rooks has taught adult education classes, religious school, trained b’nai mitzvoth, taken an active role in social action and women’s programming, and engaged in outreach to people in the process of conversion and to interfaith families.

She also directs worship and ritual and oversees all the music performed at The Temple. Along with Music Director Louie Bailey, she directs Shir Chadash, The Temple’s volunteer choir.

In 2012, Rooks released her second collection of original Jewish music on CD titled Sukkat Shalom: Shelter of Peace. All the money from the sale of CDs goes to the WHAS Crusade for Children.

Rooks has appeared several times on The Moral Side of the News, the WHAS-TV interfaith panel that is broadcast on local television and to 38 states on radio. She also serves on the clergy allocations committee of the “WHAS Crusade for Children.”

Her rabbinic thesis, Halachic Guidance for the Terminally Ill, provides insights from Jewish tradition for the modern day dilemmas of biomedical ethics. Along those lines, Rooks has served on the ethics committee of the Norton-Kosair Children’s-Alliant Hospital in-vitro fertilization board, and currently on the Hosparus ethics committee.

This summer at the Jewish Community Center of Louisville be on the lookout for a specialty camp that will fill The J with a flair for flavor. Cooking Camp will take place on The J campus this summer with one-week …

The 2017 MOSAIC Award honorees – all representing how newcomers to America can make good and give back to their adopted country – were recognized for their achievements Thursday, May 18, during a celebration at the Hyatt Downtown. In what …