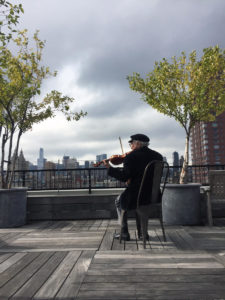 “Fiddler: A Miracle of Miracles” will open the 2020 Louisville Jewish Film Festival.

Marsha Bornstein wants you to know two things about the 2020 lineup for the Louisville Jewish Film Festival: It has lots of English and lots of laughs.
Those are two things, her audience always asks for, she said.
At least five films in this year’s festival are in English, said Bornstein, its director. Many of them have plenty of humor, even if they can’t be described solely as comedies.
“We have lighter films,” Bornstein said.
They also have more films. Period.
This year, the festival will screen 13 films – it generally presents 10 – from Israel, the United States, Canada, Mexico, Spain, Italy and the United Kingdom.
The festival will run in February 2020. Details about times, dates and venues, as well as special programming and guests, will be included in the January issue of Community.
Bornstein chalked the increase up to opportunities.
For instance, when her committee voted on this year’s selections, they weren’t even aware of Born in Jerusalem and Still Alive, a big winner at this year’s Jerusalem Film Festival.
“It wasn’t available,” Bornstein said. “Then, when we saw it, we decided to stretch because we wanted people to see it.”
They also added Anne Frank Parallel Stories, a documentary with Helen Mirren, because it presented a chance to work with the Baxter Cinema, which was screening it.
The title of one film in the festival still has not been released. Other than that, here is the 2020 film lineup:

Shoelaces (Israel) – A “dramedy” about the complicated relationship between an aging, irascible mechanic and the exuberant special-needs son he abandoned when young. When his ex-wife dies, Reuven begins caring for his now-grown son. The transition is difficult for both, as Reuven wrestles with parenting a child with disabilities, while Gadi grieves the loss of his loving mother. Hebrew with English subtitles, nominated for eight Israeli Academy Awards, including Best Film, 100 minutes.
Leona (Mexico) – An intimate film about a young Jewish woman from Mexico City who finds herself torn between her family and a forbidden love, dividing generations and leading to difficult choices and a journey of self-discovery and empowerment. Spanish with English subtitles, contains sexual content and nudity, winner for Best Feature and Best Actress Morelia at the International Film Festival, 95 minutes.
The Light of Hope (Spain) – The story of a young Red Cross nurse, Elisabeth Eidenbenz, who in the 1940s, aided hundreds of Jewish refugees suffering from disease and malnutrition at the French-Spanish border. Appalled by the dire conditions facing pregnant women and children, she converts an abandoned villa into a maternity home. When demands are made for her to turn over the Jews, she must make a decision that could endanger everyone. Spanish, Catalan, French with English subtitles, winner of the Gaudi award for Best Film, 96 minutes.
Fiddler: A Miracle of Miracles (United States) – This year’s opening night film is a documentary about how this musical became so beloved against all odds. Hal Prince, Sheldon Harnick, Harvey Fierstein, Danny Burstein, Joel Grey and Lin-Manuel Miranda all make appearances. English, 92 minutes.
Carl Laemmle (United States) – A documentary of a German-born immigrant who founded Universal Pictures. Unafraid to tackle social issues, he produced the Oscar-winning anti-war drama All Quiet on the Western Front. A humanitarian, Laemmle saved over 300 Jewish families from the Holocaust, sponsoring their immigration to the United States. English, 90 minutes.
Prosecuting Evil: The Extraordinary World of Ben Ferencz (Canada) – A profile of an unsung hero who put Nazis on trial at Nuremberg. Ferencz grew up in a tough, New York City neighborhood to become a gifted law student, At 27, he became the world chief prosecutor in the Nuremburg Trials. His crusade for a new justice system based on tolerance and compassion led to the International Criminal Court in The Hague. English, nominated for Best Canadian Feature Film and Audience Award for Best Documentary at the Atlanta Jewish Film Festival, 83 minutes.
Tel Aviv on Fire (Israel) – A hilarious satire about Salam, who is failing at his job on a Palestinian TV soap opera popular with Israelis and Palestinians. His daily commute through an Israeli checkpoint from his home in Jerusalem to his job in Ramallah leads to regular encounters with the IDF officer, who demands Salam change the show’s story line to make his wife happy. Salam struggles with concocting plot twists to suit viewers on both sides. (Hebrew with English subtitles, 97 minutes)
The Unorthodox (Israel) – A fast-paced documentary about Yakov Cohen, who, when his daughter is expelled from school simply for being Sephardic, galvanizes his friends to form the Shas Party, dedicated to Sephardic ultra-Orthodox Jews. His efforts reshape Israeli society in ways that still resonate today. Hebrew English with French subtitles, 92 minutes.
Picture of His Life (Israel, the United States) – A documentary of Israeli underwater wild-life photographer Amos Nachoum, who swam with crocodiles, killer whales, anacondas and great white sharks, but always dreamed of swimming underwater with a polar bear. Nachoum had tried it before and barely escaped. As the journey unfolds for the 65-year-old photographer, so does the story of his past; his difficult childhood, his service in an elite unit during the 1973 Yom Kippur War and other experiences that led to this quest. (English, 72 minutes)
The Keeper (United Kingdom) – The true story of Bert Trautmann, a German prisoner of war who, amid much protest and prejudice, secures the position of goalkeeper at Manchester City and becomes a soccer icon. His signing causes outrage among thousands of fans, many of them Jewish. until Manchester’s communal rabbi intervenes on his behalf. Trautmann’s love for Margaret, an Englishwoman, sustains him, but fate will soon add a twistputting their love and loyalty to the ultimate test. English, Winner of the Audience Award at the San Francisco Jewish Film Festival 120 minutes.
Born in Jerusalem and Still Alive (Israel) – In this black comedy and romance film, Ronen is a 20-something schlemiel, leading tours of terror attack sites in his native Jerusalem. He doesn’t charge for the tours. Rather, it is his way to heal from the trauma of coming of age in late 1990s-early 2000s, when Israeli-Palestinians violence has shaped the fabric of life. Jerusalem Film Festival winner for Israeli First Film, Hebrew, English, with Hebrew subtitles, 83 minutes.
Anne Frank Parallel Stories (Italy) – As a dedication to what would have been Anne Frank’s 90th birthday, Academy Award-winning actress Helen Mirren retraces her life through the pages of her diary, and through the lives of five women who, as teenage girls, were also deported to concentration camps, but survived. This unusual documentary takes audiences into Anne’s room within the secret annex of her family’s hiding place before being deported in 1942. English, 92 minutes.