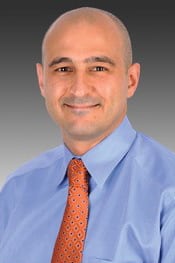 For 2,000, years, Jews dreamed of a return to our home. This dream invested our imaginations, oriented our prayers and guided our political actions. In May 1948, we lived this dream and returned home.
This same dream is still very much alive, but in a place that few of us care to consider – with Palestinians. Even though we consider Palestinian right of return a lie based on illegitimate claims and understand it as a direct threat to Israel, I suggest that Palestinian right of return is an issue that needs more room in our imagination – for our sake, not theirs.
I would like to broach this sensitive topic by introducing my friend, Yamaan Saadeh, a fifth-year neurosurgery resident at the University of Michigan. Yamaan joined me on the Palestine Children’s Relief Fund’s (PCRF’s) most recent pediatric neurosurgical mission to Gaza. Prior to this mission, Yamaan last saw his father, step-mother and sisters in 2003. His father, Salman Saadeh, is a professor of chemistry at Islamic University in Gaza City (IUGC). The elder Saadeh earned his Ph.D. in chemistry at Michigan, where Yamaan was born in 1988. His parents divorced soon thereafter, and Salman eventually returned to Gaza and a position at IUGC.
Engineering Yamaan’s family reunion would not have been possible without the PCRF staff and mission; he would simply not have been allowed in. The process of getting Yamaan into Gaza took months.
First, he had to register with the Israeli Coordinator of Government Activities in the territories; although he is an American citizen and has lived here his entire life, his fingerprints and photograph were required. Because Yamaan has an hawiyya – a Palestinian identity certificate – this identity is what matters in Israel.
Obtaining a permit to enter Gaza took two months and a great deal of effort by the PCRF Mission Coordinator, Suhail Flaifl. When Yamaan left Gaza, he was not allowed to take his laptop and other electronic items with him – something he had to plan for ahead of time.
I was fortunate to experience Yamaan’s reunion with his father’s family. His sisters – two in medical school and one a high school junior – were tremendously excited to see him, spending days decorating their home with flowers, signs and balloons. His father, grateful to see his son, just kept saying, “May Allah praise you for this” to Suhail and me.
Sharing Yamaan’s reunion with his family, I could not help thinking of our own dream of home. Naphtali Herz Imber put this yearning to words so moving they became our national anthem: “So long as still within our breasts | The Jewish heart beats true, | So long as still towards the East | To Zion looks the Jew.” (Tikvatenu, 1878)
Our beating desire – after 2,000 years – gave birth to the Zionist movement that brought us home.
Is it strategically wise to believe their longing for home is less potent than ours?
This is a very different question from whether we believe their longing to be legitimate. How Palestinians behave arises from how they understand their desires and dreams, not what we believe them to be.
In his book, Good Strategy, Bad Strategy, Richard Rummelt argues that a “good strategy honestly acknowledges the challenges being faced and provides an approach to overcoming them.” People of good will – Jews and non-Jews – are recognizing this dream of home in our enemy; is it an honest acknowledgment to try to convince the world that a Palestinian dream of return is illegitimate? Or to equate Palestinian right of return with the end of the Jewish state?
I have met and worked with many Palestinians; they all say the same: we dream of our home. The nurse practitioner living in Oregon whose family left Jaffa and dreams of returning there to swim in the sea. The orthopedic surgery resident in Gaza who yearns to be reunited with family dispersed by the events of 1948. The professor, who dreams of returning to Jerusalem where both his father and mother were born and where summers were spent with his grandmother until 1967. These are just four stories; there are countless others. On what basis do we conclude that the Palestinians will not cling to the dream of return as long as we?
In 1956, Moshe Dayan said “we are a generation that settles the land and without the steel helmet and the cannon’s maw, we will not be able to plant a tree and build a home”
But we are not that generation; we are the victorious generation.
We have built a Third Temple in Jerusalem,  the Supreme Court; a fourth, the Knesset; a fifth,  the Hebrew Museum; a sixth, Hebrew University; a seventh:  Yad Vashem.
We have built the Israel Defense Forces to protect these valuable institutions.
I don’t argue that we need to put down our steel helmets and canons – that would be clueless.
I don’t argue that we are to blame for Palestinian suffering – that would be simplistic.
I don’t argue that we are racist monsters – that would be wicked.
I argue it is to our benefit to acknowledge this Palestinian dream of home as we search for a way to bring peace and security to our children. Let it re-humanize those who have fought for their homes, even as they attacked us. Let it remind us that the heart of Judaism is not Judea and Samaria; it is Exodus 23:9: “And you shall not oppress a stranger, for you know the feelings of the stranger, since you were strangers in the land of Egypt.”
I don’t appeal for any specific policy – withdrawal, some number of states, boycotts – not any specific policy.
I suggest only that honest acknowledgment of the Palestinians’ dream of home might allow for better approaches to overcoming the challenges we face. It may allow us avenues of action to a future as peaceful and secure as HaShem might allow.

(Dr. Ian Mutchnick, a Louisville pediatric neurosurgeon, is a member of the Jewish Community Relations Council. The views expressed here are his own and not necessarily those of the JCRC.)