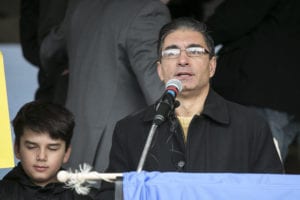 When Dr. Muhammad Babar was asked to join a delegation of 12 American-Muslim leaders on an AJC-sponsored trip to Israel this past November, he felt conflicted.
“It was not easy for me to agree to take this trip,” the Louisville physician said. “There are people within my own community who may not agree with my thought process and this engagement with Israel.”
Yet Babar, founder and president of Muslim Americans for Compassion and Doctors for Healthy Communities, did go. He interacted with Israelis and Palestinians, and he came home with his own understanding of the Middle East situation.
The AJC Project Interchange, which sponsored Babar’s trip, advances understanding of Israel for decision-makers and opinion leaders across key fields. Participants experience Israeli society, connect with their Israeli counterparts, and learn about challenges facing the country.
Babar’s group met with “policy makers, academics and common people,” he said. They went to Akko and Haifa, spent a day in Ramallah in the West Bank, and met a Druze leader.
They also visited the Dome of the Rock, the Al Aqsa Mosque, the Western Wall and the Church of the Holy Sepulcher.
“Israel is an amazing place,” he said. “The people are wonderful. It’s amazing to see how from 1948 to now, in 70 years, people from different ethnicities and languages with only one common thing – their faith – got together and they put a life together.”
At the same time, Babar was disturbed by how extremists in Israel and the Palestinian territories exploit the situation, making it difficult for people to connect with one another.
While he believes change is needed on the Arab side, “it seems like to me that this issue has been leveraged by politicians of the religious establishment on both sides,” Babar said. “It’s an issue that maybe they don’t want to solve. They’re using the suffering of the people as leverage. Behind the scenes, the Arab states are collaborating with Israel.”
In public, though, an anti-Israel image is projected.
“I honestly believe they need to be honest with their people, and they need to change this narrative,” Babar said. “Israel has as much right of existence as the Palestinian people have.”
Babar also found disturbing the suffering of the Palestinian people. In the Gaza Strip alone, he said, roughly 2.5 million people live on a small plot of land.
“Right now, it seems like a concentration camp,” Babar said. “The borders are closed by the Israelis and the Egyptians. Those people have no way to go anywhere and Hamas is abusing their authority.”
Neither side understands or empathizes with the other, Babar believes. In Israel, for instance, Arab and Jewish children attend different schools and rarely get to interact until they reach college.
“I believe there needs to be more interaction at the earlier grades,” he said. “That’s when these kids need to know each other. And many of those kids will be peacemakers in the future.”
There are some bright spots that hold hope for the future. In Haifa, Babar visited the Convent of Nazareth School, where children of different faiths attend classes together. He was so impressed by the program that he plans to support it through his organization, Muslim Americans for Compassion. He hopes the Jewish community will join him in that effort.
At the Western Wall, a spot he described as central to all three Abrahamic religions, Babar said he felt close to heaven and “the prophet” Solomon. He said he rested his head on the stonework and prayed to “our creator” for peace on earth.
“There should be no famine or wars,” Babar said. “We should respect each other as God intended for us to live, as one species that respects the dignity and integrity of their fellow beings. … I hope that that my prayers at the Western Wall come true.”