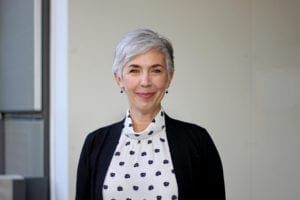 Louisville native Deborah Frockt has been named the next chief executive officer of the Jewish Family & Career Services. She succeeds Judy Freundlich Tiell, who will retire on Dec. 31.
Frockt will officially start on Feb. 1.
“She is a thoughtful, experienced, poised and professional executive with an excellent track record of setting and communicating strategy.” Search Committee Chair Stephanie Mutchnick said of Frockt in a prepared statement. “She has demonstrated a strong degree of emotional intelligence, a crucial skill for relationship building. She speaks of Jewish values and the mission with authenticity and deep understanding.”
The sister of Daniel Frockt, chief financial officer for Louisville Metro, Frockt has lived in Seattle since 1993/ She told Community she had been thinking about coming home for some time.
“It’s something that’s been in the back of my mind,” she said, “but I must say, there’s the idea of coming home and the idea of coming home for a job that’s really special.”
(Her other brother, David Frockt, is a Washington state senator.)
Frockt is no stranger to Jewish social work. She currently serves as director of marketing and communications and as a member of the executive team at
Jewish Family Service of Seattle.
But she began her career in Louisville, working as a dramaturg at Actors Theater before moving to Seattle to take a similar position with the Seattle Children’s Theatre.
She also has been director of admissions and marketing and director of advancement at Seattle Jewish Community School.
At Seattle’s JFS, Frockt has been integrally involved with strategy and operations support. She previously served as its annual giving director.
She said there are many similarities in the services offered by the Louisville and Seattle agencies, “and some things that are different, new and exciting.”
Case in point, she said the career and workforce development services offered by JFCS are stronger than the Seattle model.
She attributed the success of those services, and others, to Tiell, whom she came to know during the application process.
“When so many people in the community come together around one person and around one institution,” Frockt said, “that’s the dream.”
JFCS Board President Peter Resnick said several qualified candidates applied for the position.
“Our search committee conducted a thorough and thoughtful process to source, evaluate, and recommend candidates that best matched with the position’s qualifications and the organization’s priorities,” Resnik said in a prepared statement.
The search committee included Madeline Abramson, Bill Altman, Jordan Green, Jay Klempner, Beth Kuhn, Stephanie Mutchnick, Resnik (non-voting), and Karen Sherman.
Frockt attended Ballard High School and went on to graduate from Stanford University with degrees in English and creating writing, and English and dramatic literature.
She and her husband, Steve Alter, have two sons, Aaron and Isaac Alter.
Frockt said she and Tiell are working together as part of the executive transition in December, “so there’s a smooth, strong transition for the agency.”
“I’m just so passionate,” she said, “about the mission of the Jewish Family & Career Services.”