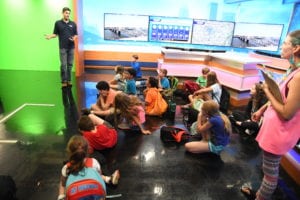 Weather campers visited the set of WLKY to learn more about meteorology. In the background are some of the screens used for the weather forecast. (Community photo by William Beasley)

Summer is heating up for Camp J, especially for the new specialty Weather Camp.
WLKY’s Matt Milosevich, a meteorologist and ELC parent, leads this new camp, which was held for rising third to seventh grade campers, during July 16 through 20.
“The kids love it,” Camp Director Mindye Mannel said. “It’s something totally different than we have ever done before.”
During the week, campers visited the National Weather Service and WLKY’s studio. While at the NWS, they learned about all different types of weather in the Kentuckiana region.
“We saw their control room and their radars, and after that we went to WLKY’s studio,” Assistant Camp Director Katelyn Graves said. “The kids got to film their own weather report in front of the green screen. It was really cute.”
The visits may have inspired some campers to even become weathermen and women.
“We have a couple aspiring meteorologists,” Graves said. “A couple of kids, their dream job is to be a meteorologist, so they are very excited.”
Mannel said there is value in giving campers an adult role model from the community.
“[Matt] is someone they see on TV,” she said, “and they are like, ‘I want to be that job. I want to be that person.’”
In addition to the field trips, the campers also learned about weather on campus at The J. The campers set up a weather station at Camp J that will provide accurate weather readings. They also also met with The J’s Jewish Outdoor Food Environmental Education Director Michael Fraade, who talked with them weather and crops.
One Weather Camp counselor said the campers also made paper airplanes, conducted cloud experiments in bottles, and took temperature readings around The J. They also tasted treats baked in the heat of the sun.
“We are actually making solar ovens right now,” the counselor said. “We have got s’mores waiting for us outside.”
Weather Camp concluded on July 20 with a trip to the Louisville Science Center IMAX to see the documentary film Extreme Weather.
Mannel said she is excited about the success not only of Weather Camp but also of the other new and returning traditional and specialty camps.
“There are so many new contractors,” she said. “For specialty camps, there are so many new options. That’s been good. I think that has brought in a lot of new kids and sort of some new energy.”
Traditional camp continues to focus on incorporating Jewish values, according to Teen Director Becca Waller. “The [superhero] theme has been a hit. The kids love it.”