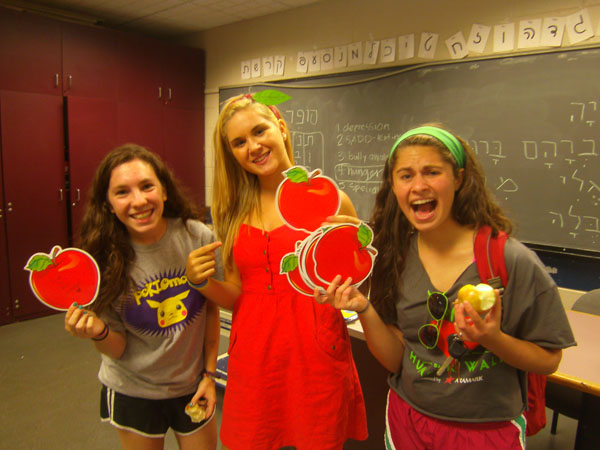 Over Labor Day weekend, 37 teens from Louisville went to Cincinnati to participate in BBYO KIO Roundtables Brotherhood/Sisterhood Convention, which was one of the biggest KIO Conventions of all time.

During Roundtables, the boards of Louisville’s Drew Corson AZA and Jay Levine met with their regional counterparts where they learned leadership skills and planned for their terms on the chapter boards.

After Roundtables concluded, the focus of the weekend shifted to Brotherhood and Sisterhood activities. The brotherhood activity was a basketball tournament in which Drew Corson entered two teams, one of which came in second place. The sisterhood activity consisted of yoga, zumba and meditation, which brought the girls of the region closer together.

On Monday, September 10, the girls of Jay Levine BBG got together for a Rosh Hashanah Program. The program focused on apples, reflecting on the past year, and getting ready for the next year. Girls came to the event dressed as apples – most as actual apples and one as an I-product. The girls first bobbed for apples, then wrote their regrets for the past year on apples, which they smashed on the black top. They concluded the program by writing their wishes for the New Year on paper apples.

[by Phyllis Shaikun] The opening luncheon of the National Council of Jewish Women’s programming year was held on Wednesday, September 12, at the Louisville Marriott East. President Mindy Klein presided over the meeting, which featured Norton Healthcare spokesperson Jackie Hayes …

[by Shiela Steinman Wallace] I love going to the theater. There is something about attending a live performance that is stirring and exciting. It is an experience I always look forward to. Once in a great while, there is a …