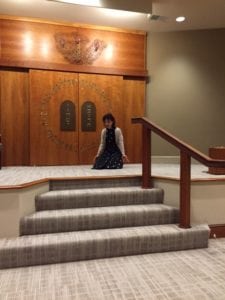 Susan Stein chants a psalm on the bima at Temple Shalom while in character as Etty. (photo by Lee Chottiner)

Susan Stein has performed her one-woman play, Etty, at Yad Vashem in Israel and before the archbishop of Canterbury in England.

She has reprised it at high schools, religious sites and behind prison walls where inmates have given her unique feedback on the drama based on the actual diaries and letters of Dutch Holocaust victim Esther “Etty” Hillesum.

But the play took on a new meaning when Stein, a New York actress, reinserted a passage from one of Etty’s diaries, the one describing the day she registered with authorities in Nazi-occupied Holland as a Jew.

“Inside, the place is bathed in sunlight and [from] the classroom next door, we hear children singing,” Stein spoke Etty’s words during her January 28 performance at Temple Shalom. “It’s as if we come to a doctor’s consulting room, not a single voice is raised. A lady asks whether children below the age of 15 have to register as well. One of them says with a cheerful grin, ‘even if they’re just one hour old, ma’am.’”

Stein had previously removed that passage from the play, but she put it back, saying it has impact now, given President Donald Trump’s executive order barring entry to citizens of seven predominantly Muslim countries, and talk of a registry for Muslims living in the United States.

“I took that out, but boy! That feels incredibly timely,” she told her audience during a Q & A session after the play. “It has a resonance now.”

Stein was the Temple Shalom artist in residence last week. She performed Etty at the synagogue as well as Atherton, Louisville Male, and duPont Manual high schools and St. Francis Assisi Middle School.

The synagogue performance came one day after the 72nd anniversary of the liberation of Auschwitz, where Etty was murdered, and one day after hate-filled anti-Semitic voicemail messages were left at Temple Shalom and nearby Keneseth Israel Congregation.

Stein adopted Etty from her diaries after purchasing an abridged version of them at a yard sale for 50 cents. Directed by acclaimed actor, director, playwright Austin Pendleton (Fiddler on the Roof, My Cousin Vinny, Catch-22), the play portrays the evolution of Etty’s feelings, religious beliefs and humanity, and the anti-Jewish decrees of the time.

Etty’s entries sometimes lurch from one extreme to another.

“Yesterday, I felt like screaming out loud, ‘I want a man, a man all to myself,’” Etty says. “What I really want is a man for life and to build something together. Actually, I want nothing of the kind.”

She writes about the grim scenes as cattle cars are boarded at Westerbork transit camp, where Etty worked as part of the Jewish Council. But she also writes, “I have learned to love Westerbork.”

Etty began writing her diaries in 1941 at age 27, at the urging of her therapist-turn-lover, Julius Spier. She filled several volumes by 1943 when she and her family were sent to Auschwitz.

In one entry, Etty states she will go only so far to save herself.

“I wouldn’t turn down an exemption on account of my enflamed kidneys or bladder, and I have been recommended for some sort of soft job at the Jewish Council,” Etty says. “Jewish Council, this strange agency in Amsterdam between Nazis and the Jews, has permission to hire 180 people, and the desperate are thronging there in droves, but that is as far as I am willing to go. Beyond that, I am not willing to pull any strings. Everyone who tries to save himself must realize that if he doesn’t go another must take his place.”

In other entries, she speaks directly to God.

“I’m not finished with you, God, not by a long shot, or with this world,” she says. “I shall simply lie down and try to be a prayer.”

As an actress, Stein is sometimes frustrated, not by what Etty writes, but by what she doesn’t write.

For instance, unlike Anne Frank, who wrote her diary from her Amsterdam hiding place, Etty refused to hide, even though her friends tried once to kidnap her. Yet she never wrote about the incident, leaving Stein, who speaks only Etty’s words, unsure how to communicate what happened.

After all the years Stein has spent with Etty’s diaries, bringing her words to life, she remains baffled by why the diarist isn’t better known. Her work wasn’t even published until 1981.

“We all know Anne Frank, but we don’t know this woman who says to God, ‘If you cannot help us, I shall have to help you, God.’” Stein said. “Why don’t we know her?”