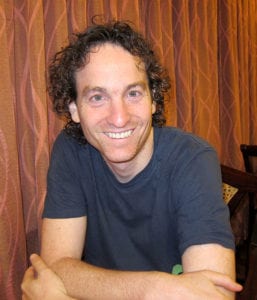 Israeli filmmaker Dani Menkin will speak at the screening of “The Picture of His Life” during the Louisville Jewish Film Festival.

Dani Menkin is fascinated by the human spirit.
A noted Israeli filmmaker, he loves training his camera lens on people overcoming harsh circumstances, facing impossible odds, only to come out on the other side winners, or maybe just healed.
It’s a skill he learned in his early days as a sports reporter.
“It shapes the way I tell stories,” Menkin said. “In sports, you always want to know what happened next. And in movies, I think it’s the same way.”
Menkin, together with Yonatan Nir, co-created the film The Picture of His Life, the story of the famous Israeli underwater wildlife photographer Amos Nachoum, to be shown at the 22nd Annual Louisville Jewish Festival.
Menkin will speak following the Feb. 16 screening of his film at the Kentucky Science Center.
But he’s not alone. Eight speakers are scheduled following films at this year’s festival.
Louisville native Daniel Kleinman, who co-wrote the screenplay for Tel Aviv on Fire, will speak following the Feb 29 screening of his film at the Village 8.
The other speakers are Asaf Angermann, University of Louisville visiting professor of Jewish thought & philosophy; Corey Shapiro, legal director of the ACLU of Kentucky; Rabbi Diane Tracht of the Jewish Family & Career Services; Michal Kofman, visiting UofL associate professor of sociology; Abby Glogower, curator of Jewish collections at the Filson Historical Society; and Fred Gross, a journalist and Holocaust survivor.
Menkin, who will be making his third appearance at the film festival, said The Picture of His Life shows several sides to Nachoum’s story, any one of which he could address.
“There are so many layers to this movie,” he said. “There’s the personal layer of the story, (the personal trauma Nachoum dealt with from the Yom Kippur War and his relationship with his father). He challenged all these things on the journey he’s taking, shooting big animals under water without protection, showing nature can live in harmony.”
Menkin could also speak on his plans to remake his previous documentaries, including On the Map and Dolphin Boy, as feature films.

“What I do now is turn my documentaries into narratives. All the films I have had, I’m working on turning them into feature films, even though I shot them as documentaries.”
As for the other speakers:
Glogower will speak after the screening of Carl Leammle, a film about the founder of Universal Pictures who saved more than 300 Jewish families during the war. She said she will make connections between the film and local Jewish history.

Angermann is the only speaker who will appear following two screenings – The Unorthodox, about the founder of Israel’s Shas Party, and Born in Jerusalem and Still Alive, a dark comedy about a young man who leads tours of terrorist attack sites. He said he will give background and context for both films.
“For Born in Jerusalem, I will talk about the situation in Israel and in Palestine in the late 1990s-early 2000s and daily life under constant danger of terrorist attacks,” he said. “For The Unorthodox, I will speak about some systematic racial discrimination in Israel that led to the formation of the Shas party, and whether it provided a solution to the problem.”
He will not give a full political analysis and history of Shas.

Tracht will speak after Shoelaces, the story of an estranged father of an adult special needs son, who becomes his chief caregiver after his ex-wife dies. Tracht will moderate a conversation about whatever the audience brings to the table. “Maybe there will be people with special needs who will talk about their own experiences, maybe people who just really like movies will talk about the plot,” she said.

Shapiro will speak after Prosecuting Evil: The Extraordinary World of Ben Ferencz. He will address how this story of a Nuremberg war crimes prosecutor “compels us to follow the rule of law, weaving his views that the United States should join the International Criminal Court.”

Kofman will speak after the screening of Leona, the story of a Jewish woman in Mexico City who discovers forbidden love.He will facilitate a discussion on issues of gender, the development of identities in a contemporary Jewish Latin-American context and the transformation and interpretation of Jewish ritual.

Fred Gross will be speaking after, The Light of Hope, the story of a Red Cross nurse who helped hundreds of Jewish refugees on the Spanish border during the war. He said he will use his talk to focus on “heroes on the side of life.” For instance, he said, Italian diplomats in Nice, France were instrumental in saving Jewish lives, including his own.
“They are all my light of hope,” Gross said. “I am forever grateful to them.”

Want to go?
The 22nd Louisville Jewish Film Festival runs from Feb. 8 to March 3. Thirteen documentaries and feature films will be presented. The opening night picture, Fiddler: A Miracle of Miracles, the story behind the musical Fiddler on the Roof, will be screened at 7:30 p.m., Saturday, Feb. 8, at Bellarmine University’s Cralle Theatre. A post-reception and music by Emily and Monty Fields will follow. Visit jewishlouisville.org/filmfestival or call 502-459-0660 for tickets, times, dates and venues.

Daniel Kleinman owes the resurgence of his career to an Israeli movie about a Palestinian soap opera. The Louisville native, screenplay writer and retired professor of film at Columbia University, co-wrote the comedy, Tel Aviv on Fire, which will be …