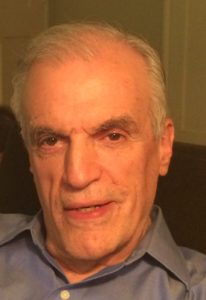 Daniel Kleinman: “My career has been revived by Tel Aviv on Fire.”

Daniel Kleinman owes the resurgence of his career to an Israeli movie about a Palestinian soap opera.
The Louisville native, screenplay writer and retired professor of film at Columbia University, co-wrote the comedy, Tel Aviv on Fire, which will be screened on Feb. 29 at the 22nd Annual Louisville Jewish Film Festival.
Prior to that project, Kleinman had not written a new screenplay in 20 years. He has just two other feature films to his credit, the last one being made in the 1980s.
“My career has been revived by Tel Aviv on Fire,” he told Community, “and I’m very pleased by that.”
The movie is about Salam, a struggling Palestinian writer from Jerusalem who works on a popular soap opera produced in Ramallah, Tel Aviv on Fire. Salam gets ideas for the storyline from the Israeli commander at the checkpoint he passes through each day to and from work. But when the commander presses him for an ending that will please his wife – a big fan of the show – that conflicts with the producer’s own ideas, he finds himself in a difficult situation. Who shall he please?
“It’s a comedy,” Kleinman said of the movie. “There are obvious comments on the nature of the conflict in Israel, but we were going for comedy.”
Tel Aviv on Fire is Kleinman’s first foreign language film, though he wrote the screenplay in English.
The idea for the film came from his writing partner, Sameh Zoabi.
“Dan was my professor at Columbia, and he always had a great insight and gave constructive criticism on my scripts,” Zoabi said. “So when I had the idea for Tel Aviv on Fire, I shared it with him. The idea was in its early stage, and we started meeting and fleshing out the idea.”

The story is based on real life moments Zoabi experienced, Kleinman said.
“When his first feature film came out, there were people who told him it was too Jewish; there were people who told him it was too Arabic. He wanted to make a film about being caught between two narratives.”
The collaboration was perfect for Kleinman, who prefers writing with a partner.
“If he (Zoabi) gives me an idea, I try to give it back to him a little better and vice versa,” he said. “We spark each other; it’s very nice.”
Since its release, Tel Aviv on Fire, which has played in theaters around the world, has garnered many accolades.
It won the Ofer, Israel’s version of the Academy Award, for best screenplay, was nominated for the European Film Award for best comedy and won the Asia Pacific Screen Award for best screenplay.
Best of all, it has played at Arab and Jewish film festivals to rave reviews. 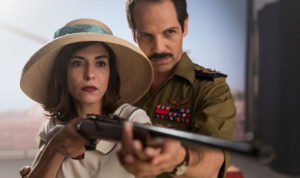 A scene from “Tel Aviv on Fire.”

At the Westside JCC (Manhattan), Kleinman said the audience “was in stitches from beginning to end.”
The same for festivals in Austin and Haifa, he said, though he sensed in Haifa that the Arabs and Jews in the audience were reacting differently to the jokes.
While he sees the movie as a comedy, Kleinman believes its positive reception is due, in part to its honest treatment, sans politics, of living in what many in Israel have called “the situation.”
“I think it won these prizes because it’s not only funny, but because it has some significance behind it.”
The son of Louis Kleinman, who worked for the L&N Railroad for 50 years, and Blumie Krentzman Kleinman, Kleinman said he grew up hanging out at the JCC and was even present for its grand opening.
He graduated from Atherton High School in 1961, considered something of a math genius.
“I was going to be a mathematician,” he said. “If you looked at old files of the Courier-Journal, you would find a few articles about me as a high school wiz in mathematics.”
Which is what he studied at Princeton University, but he also ran the film series, charged with selected the movies that played on campus each week.
“In those days, you had to run 16mm films; there was no video,” he said. “They’d send it in reels of 16 mm and I was picking which films to show …. When the cans came I was able to screen them in my dorm privately; I just fell in love with film.”
After college, instead and continuing his math studies, he attend film school at New York University and eventually taught there before moving to Columbia.
In addition to Tel Aviv on Fire, his other feature film credits are Rage (1972), a drama with George C. Scott, and Ultra Warrior (1990), a sci-fi comedy.
He’s written several other screenplays that have not been made into movies.
For his next project, Kleinman is teaming with Zoabi again to write a romantic comedy set in the Arab world.
“It’s pure joy to work with Dan,” Zoabi said. “That’s why I continue to work with Dan.”
Likewise for Kleinman.
“This is the first time I found a writing partner with the same comedy instincts I have.”