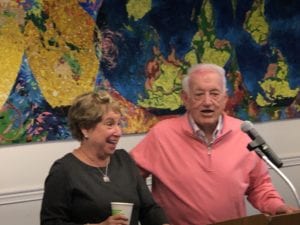 Sonny and Janet Meyer address the celebration for the newly expanded food pantry that is named for them. (Community photos by Lee Chottiner)

Boasting four times more space, the Sonny & Janet Meyer Food Pantry at the Jewish Family & Career Services “reopened” Sunday, Jan 26, amid a ceremony drawing more than 100 people from across Louisville.
Though already well stocked for the occasion, people continued to drop off bags of groceries for the pantry at the JFCS entrance before going inside to the party. Later, staffers handed out reusable shopping bags for future donations.
The new pantry is more visible than its old space toward the back of the building. It is now located just off the main lobby and has two rooms instead of one – one for storage, the other an open shopping space where clients may make their own grocery/personal needs selections.
That last feature is a big reason why the JFCS secured a $10,000 Dare to Care/CareSource grant to upgrade the pantry, according to Laura Frankrone, partner development coordinator at Dare to Care Food Bank.
“People can shop as if in a store,” Frankrone said. “We really liked that concept.”
The new pantry, which serves about 120 people per month, also has two new refrigerator/freezers donated by General Electric, better addressing the constant problem of food insecurity in the community.
“What you see in the new pantry is truly moving us from strength to strength,” said JFCS Chief Executive Officer Deb Frockt. 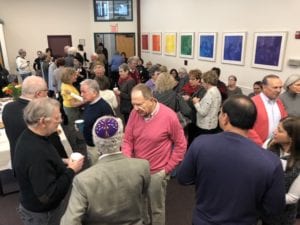 More than 100 people attended the “grand reopening” at the Jewish Family & Career Services.

In welcoming guests to the grand reopening, Frockt said the food pantry serves clients who find their incomes “insufficient to meet their basic needs.”
People have too little to eat for many different reasons, she said, including taking care of others’ needs before their own. Frockt described one woman, the owner of a service dog, who fed her pet before she ate.
In paying tribute to the community work of Sonny and Janet Meyer, the namesakes of the pantry, and bemoaning the divisiveness and hate speech across the country, Louisville Metro Mayor Greg Fischer urged everyone present to “be loud with compassion and kindness, and make sure that prevails in society.”
To make room for the revamped pantry, which was formally opened with a ribbon-cutting ceremony, JFCS has moved its Quiet Room, a “respite” where clients can wait for their appointments, across the hall.
Frockt also thanked the Jewish Federation of Louisville, the Jewish Heritage Fund for Excellence, Metro United Way and her predecessor, Judy Freundlich Tiell, for their support of the pantry.
Though the ceremony was billed as a “grand reopening,” the pantry stayed open during its move to the new space.
“Seamless service,” Frockt said.
Finally, Sonny Meyer said the grand reopening comes on the heels of a High Holy Days food drive in which the community donated more than 8,000 pounds of groceries, often utilizing the most modern way to perform the mitzvah.
“We had Amazon trucks showing up for days,” Meyer told the crowd. “Thank you, thank you, thank you again.”

Daniel Kleinman owes the resurgence of his career to an Israeli movie about a Palestinian soap opera. The Louisville native, screenplay writer and retired professor of film at Columbia University, co-wrote the comedy, Tel Aviv on Fire, which will be …