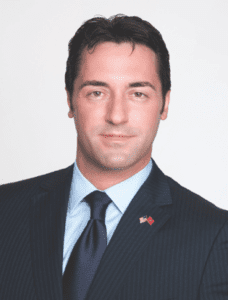 Like many other Americans, Michael Masters followed the news about the Feb. 14 attempted assassination of Louisville mayoral candidate Craig Greenberg.
However, Masters, a career security expert, saw the incident from a far different perspective.
To him, the shooting demonstrates the need for Jewish communities, large and small, to hire community professionals who know how to keep their leaders, their facilities, their events and services safe.
“It certainly drives home for the community … the criticality of having this type of program in place,” Masters said.
And Louisville will soon have one.
Masters is the national director and chief executive officer of the Secure Community Network (SCN), the official safety and security arm of the North American Jewish communities, that works with Jewish communities, police and other partners to recruit security directors and develop security plans.
The SCN is currently working with the Louisville Jewish Federation to recruit a permanent regional security advisor (RSA) to oversee the development and maintenance of such a plan. The hiring is part of the Federation’s SAFE Louisville project, which is cochaired by Bill Altman and Ben Vaughan.
The Louisville RSA will represent the SCN on the ground in Louisville, serving as an “expert security advisor, liaison, and training coordinator” to the community, according to the job description.
“They will be working with the community and each organization to assess the security status of the community and the individual facilities,” Masters said.
The RSA also will identify strengths and opportunities for enhancement at each facility, develop a training and exercise program for the whole community, and coordinate with police, the Department of Homeland Security and other security partners.
RSAs also play a role in paying for the plans they help develop, working with communities to access public funding. Among the best known is the $180 million Federal Nonprofit Security Grant Program. Support is growing in Congress to increase that program to $360 million.
Though a prime focus of the RSA will be the facilities of Jewish Louisville – the JCC, synagogues, day schools, agencies – incidents like the attack on Greenberg show how the expert’s work could take him (or her) anywhere in the city.
“We saw the kosher supermarket in Jersey City attacked,” Masters said. “Unfortunately, we don’t have the luxury of limiting the bad guys to where we want them to be.”
While antisemitism has driven the most high-profile attacks on Jews since the Tree of Life shootings in Pittsburgh, Masters warned that every act of violence on Jewish property doesn’t necessarily fit that description.
“The incident or impact may not always be from an antisemitic incident or attack,” he said. “An issue of a noncustodial parent or an act of workplace violence doesn’t need to be motivated by antisemitism if it occurs in a JCC or in a synagogue or at the Jewish day school. They’re equally impactful to the facility.”
He equated the work of an RSA to an insurance policy. “We are implementing an effort that provides insurance for us in the event of an incident.”
A Chicago native, Masters, 43, has spent most of his career in security: chief of staff for the Chicago Police Department; executive director of the Department of Homeland Security and Emergency Management for Cook County, Illinois; and senior vice president of The Soufan Group, a strategic advisory firm that assists organizations in the public and private sectors with addressing emergent threats.
He joined SCN in 2017. At the time, there were 22 RSAs in Jewish communities nationwide. Today, there are more than 50.
The demand for RSAs (they’re called security directors in some communities) has grown as threats to smaller Jewish communities have become more acute.
“We have seen the threat shift,” Masters said. “Unfortunately, we’ve recognized from Charleston to Chattanooga, Tennessee, to Charlottesville and of course Colleyville that some of our greatest threats were in our smaller or midsize communities, sometimes more rural communities. So, we work very diligently with communities to address that.”
Masters said the RSA, whoever is hired, won’t be invisible to the community.
“We inform our team members that if they’re looking at the back side of a desk regularly, they are probably not doing the job correctly. This is a highly engaged, out-in-the-community position.”