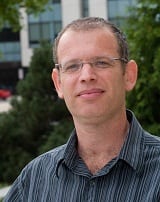 The community is invited to hear Dr. Shachar Pinsker speak on “A Rich Brew: Urban Cafés and Modern Jewish Culture” at the University of Louisville’s First Annual Jewish Heritage Fund for Excellence Lecture on Sunday, October 26, at 2 p.m. at the Cressman Center for Visual Arts, 100 E. Main St.

Dr. Pinsker’s talk will explore the remarkable ways that the vital café life of Odessa, Vienna, Tel Aviv, and other cities shaped Jewish arts and ideas in the early 20th Century.
Dr. Pinsker is associate professor of Hebrew Literature and Culture at the University of Michigan. He earned his Ph.D. from the University of California, Berkeley, has been a visiting professor at Harvard, Tel Aviv, Ben Gurion and the Hebrew University and lectured extensively in the U.S., Europe and Israel.

He is the author of Literary Passports: The Making of Modernist Hebrew Fiction in Europe (Stanford University Press, 2011), which won the Jordan Schnitzler Award, and the co-editor of Hebrew, Gender, and Modernity (University of Maryland Press, 2007). He has published numerous articles and chapters dealing with Hebrew, Jewish and Israeli literature and culture.
The lecture will be followed by a reception featuring live music.

This event is free and open to the community, but reservations are requested and can be made at http://a-rich-brew.eventbrite.com.

This event is supported by the Jewish Heritage Fund for Excellence and the Division of Humanities at the University of Louisville.

A toned body is not always enough motivation to get people into the gym and lifting weights. Sometimes it takes bourbon. The JCC can make that happen with its Barbells and Bourbon class. The group, led by Ryan Perryman, will …

As I brought Dr. Capilouto, president of the University of Kentucky, into my office last week, I offered a typical greeting: “Welcome to the Louisville JCC.” Then, knowing that Lexington doesn’t have one, nor does any other city in Kentucky, …

On October 5, Hadassah women welcomed the Jewish New Year with an apple-themed picnic at the Big 4 Bridge. While the Belle of Louisville floated by, women enjoyed apples from Huber’s Orchard, honey from Israel and homemade apple cakes and …