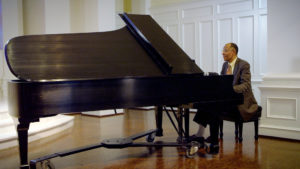 Harry Pickens performs “Celebration” during a recording session at the Second Presbyterian Church on Brownsboro Road. The Jewish Community Center commissioned the piece to celebrate its duo announcements that the future JCC would be named for the Trager family and that the Capital Campaign had surpassed the $42.5 million “milestone.” (photo by Light Forge Productions)

When the Jewish Community of Louisville commissioned pianist and composer Harry Pickens to write a piece celebrating the new Jewish Community Center, that’s exactly what they got: a celebration.
Pickens debuted the five-minute celebratory composition, which he titled – of course – Celebration, during a pre-recorded program on March 8 announcing that the new facility would be named the Trager Family JCC and that the Capital Campaign had hit its $42.5 million milestone.
“When they requested it, they wanted something that would celebrate this new beginning,” said Pickens, 61.
The composition is divided into four parts: “Celebration” (first and last movements), lament, ecstatic prayer and the blues.
“Lament,” which includes Eastern European influences, commemorates the establishment of the JCC as a welcoming place for people who were not welcomed elsewhere.
“Ecstatic Prayer” is influenced by Psalm 127, which includes the passage, “Unless the Lord builds the house, its builder labors in vain on it” – a passage that Pickens considers “significant symbolically” for the JCC project.
Finally, “Blues” reflects the “shared legacy” of Blacks and Jews, and even includes a melodic excerpt, or “quote,” from a George Gershwin piece: Second Prelude for Piano. Pickens, who is Black, said he selected it for its blues and Jewish influences.
“It’s really a way of bringing these legacies together,” Pickens said, “honoring the suffering, honoring the spiritual components and honoring what the blues is all about…. It’s about triumphing in the face of whatever.”
Pickens said he talked to several JCC donors, learning about the history of the center, and listened to Jewish melodies while composing the piece.
A jazz pianist, composer, author, teacher and facilitator, Pickens has performed around the world and composed more than 100 choral works. He has played with Dizzy Gillespie, Joe Henderson and Freddie Hubbard. He also appeared on Marian McPartland’s Piano Jazz program on National Public Radio.
Memorable moments in his career include his musical backgrounds for the poetry of Wendell Berry and a personal performance for the Dalai Lama.

Community is interested in how you celebrate your seder this year. Virtually? In person? What are you doing to make your seder different, meaningful and cool? Send us a brief description to community@jewishlouisville.org.

This is the third in a series of photo galleries made possible by the Louisville Jewish Archives Committee. The panel is seeking help from Community readers to identify photos from its collection, which depicts 100 years of Jewish life in …