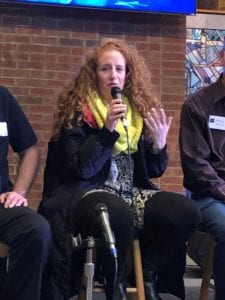 Michelle Koch describes the work of the Muslim-Jewish Solidarity Committee during a panel discussion at the Nov. 11 Faith Over Fear program at the First Christian Church of Louisville. (Community photo by Lee Chottiner)

One by one, the panelists were asked what they would do to counter Islamophobia. Finally, it was Michelle Koch’s turn.
She proposed an interesting idea: Passover in a Mosque.
Actually, it wasn’t a new idea. Koch, the co-founder and executive director of the Muslim-Jewish Solidarity Committee (MJSC) in New York, has held a seder at a Midtown Manhattan mosque every year for the past five years.
It’s a hit, she said, drawing diverse, sellout crowds.
“We try to make it engaging and get people to participate, Koch said. “We try to create opportunities for people to ask questions.”
They even incorporate a bit of Islamic culture in the seder, adding a few lines from the koranic version of the Exodus.
Koch was in Louisville on Monday, Nov. 11, for Faith over Fear, a daylong program at the First Christian Church to equip faith leaders with strategies for dealing with anti-Muslim bigotry.
Koch, who grew up in Israel, joined an afternoon panel with Evangelical and Muslim experts to focus on strategies for engagement and change. They addressed ideas such as bringing Jewish, Christian and Muslim children together to learn about each other through poetry, visiting each other’s houses of worship and holding “selfie moments” with people who previously found meeting one another uncomfortable or challenging.
Muhammad Babar, president of Muslim Americans for Compassion, said Muslims have felt more threatened in recent years than they did after 9-11.
But to diffuse Islamophobia requires more than the 1 million or so Muslims who live in the United States can do by themselves, Babar said.
“Our voice cannot go out across the nation,” he said. “That’s why we need allies.”
The day of the program being Veterans Day, Babar suggested recalling the “millions” of Muslims and Hindus who fought for the allies during World Wars I and II – a fact not widely known, he said.
A former music teacher, Koch said MJSC began “organically” in 2014 with a handful people getting together in offices, synagogues and mosques.
Its breakthrough moment came in 2015 when they organized an iftar, the feast Muslims gather for at the end of a day of fasting during Ramadan. The event, which was held at Emanu-El Temple near Central Park, drew 150 people.
“It was enlightening and amazing to see all these people into what we were doing,” she said. Since then, MJSC has held many iftars each year, the “big one” always being at Emanu-El.
MSJC also holds an annual “Shalom-Salaam Creative Retreat,” a daylong event of poetry, music workshops and activities designed to build bridges. Koch said the event will branch out next year to Philadelphia and Washington.
The long-range plan for MJSC, which has a 3,000-name mailing list, is to have its own interfaith community center and to establish chapters around the country.
“We have to learn about our neighbors and what they are about,” Koch said. “It makes a lot more happier world rather than ‘othering’ people.”