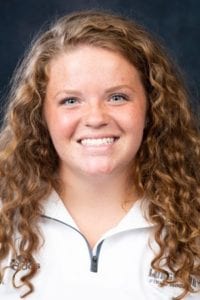 A Louisville field hockey player will compete against some of the best Jewish athletes in the world at the 15th European Maccabi Games in Budapest, Hungary.
Abigail Goldberg, 20, a rising junior at Longwood University and a Ballard High School graduate, will be a goalkeeper for Team USA. She joins show jumper Andrea Glazer as the only two Louisvillians competing at the games, which run from July 29 to Aug. 7.
“The competition is going to be good,” Goldberg said. “We will play against some very high-caliber players from countries like Argentina, the Netherlands and Germany.”
Making the team was more like an application than a tryout, she explained.
“I had to send a video, and the coaches from my university made a recommendation. There was not a formal tryout because of the distance … but based on the film and the recommendations from my coaches, they made a decision.”
A psychology major at Longwood, Goldberg competes in Division I field hockey there.
She also played with the International Feld Hockey Club of Kentucky (IFHCK) for four years, traveling around the country to compete.
Goldberg is a daughter of Deborah and Brian Goldberg, and a granddaughter of Barbara and Eddie Goldberg, all of Louisville and members of Adath Jeshurun. She has one sister, Marnina, and two brothers, Ethan and Noah.
Though she never competed in regional Maccabi Games,
“I always wanted to play internationally,” she said.
“I tried out for the World Games (Maccabiah in Israel) two years ago. I was the second alternate of nine goalies, so I did not make the team.  …. Hopefully, in two more years I will be at the World Games.”