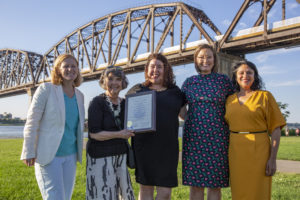 By Lisa Hornung
Community Editor
The past 125 years were filled with change and advocacy for the National Council of Jewish Women, Louisville Section. Don’t expect the next 125 to be any different.
As the Louisville Section celebrated its 125th anniversary on June 15 with a ceremony at the Big Four Bridge, the
historic span lit up in NCJW’s blue and green colors, and speaker after speaker reminded the guests that the chapter’s work will continue just as vigorously.
“The future of NCJW, I think, relies on our past,” said Executive Director Nancy Chazen. “I think that’s what we’re really trying to get back to, just the involvement, the engagement of our members, reestablishing a lot of our community partnerships and just having a seat at the table again, to really make some impact in the community.”
About 40 guests attended the event at Waterfront Park, including Kentucky Lt. Gov. Jacqueline Coleman, the guest
speaker, who told the NCJW members that she and Gov. Andy Beshear share their goals of better access to childcare,
expanded voting rights, racial justice and gender equity.
“Finding solutions to these complex issues creates the foundation that we need to fulfill for our vision of building a better society through meaningful policy changes, through greater communities and support programs, and through a greater sense of compassion that pervades everything that we do,” Coleman said.
State Policy Advocacy Chair Beth Salamon said NCJW continues to fight for progressive ideals, including expanding women’s rights and securing steady funding for the Family Recovery Courts.
“The future? I think it’s looking good,” Salamon said. “We’re really focusing on voting rights, women’s reproductive
rights – and in this state it’s always a challenge. But it’s something that we’re
not going to stop working on.”
One challenge NCJW faces is getting younger women involved with its work. Chazen said the chapter is reaching out
to teenage girls through BBYO groups, trying to involve them “just coming out of their bat mitzvahs.”
Simultaneously, it is engaging college students looking for internships, volunteer hours or connections to Judaism.
“Now that they’re out of the home and kind of on their own, that’s a difficult target audience to try to grab,” Chazen
said. “Same, too, with even just working moms. We have so many different commitments to school, to different
religious groups.”
This outreach, she continued, will enable young women to “pick and choose” the kind of programming that
speaks to them “where they want their time and energy to go.”
Echoing that, Salamon said the Louisville Section is creating committees that allow women to work on their favorite causes.
“We’ve been working really hard at building coalitions and have started forming subject committee groups for
advocacy,” Salamon said. “We’ve got one for elder advocacy, we’re doing one for reproductive rights. There’s a voting
rights committee. So, we’re really trying to find out what makes people excited
and then plug them in to what we’re doing.”
Louisville Metro Councilwoman Cassie Chambers Armstrong presented NCJW with a proclamation from the
city, recognizing the work that the Louisville Section has done.
“As an attorney, I know firsthand the impact of the projects that NCJW has been involved with,” Chambers
Armstrong said. “I know that these ideas and these projects that you all have started as a dream for you all turned
into a reality; they are now making a difference in the lives of women, children and families. They are truly
helping people in our community.”
Lt. Gov. Coleman called women like those of the NCJW the true changemakers in society.
“I heard just before I came up here that this is a group that gets to action,” she said. “Well, the W gives that away,
right?”