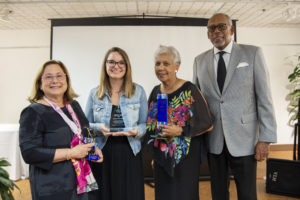 Marsha Roth (left), this year’s winner of the Ronald and Marie Abrams Volunteer of the Year Award, Kathleen Horn, winner of the Arthur S. Kling Award, and Wade and Alice Houston, winners of the Blanche B. Ottenheimer Award, are seen here with their awards following the July 8 JCL Annual Meeting. (Community photo by Robbyn McClain)

Alice and Wade Houston, longtime volunteers, entrepreneurs and philanthropists, accepted the Blanche B. Ottenheimer Award, the highest honor given by the Jewish Community of Louisville, during its Annual Meeting on July 8 in the Patio Gallery.
The meeting included a look back at the past year at the JCC, the celebration of successes and the election of new Board of Directors members.
But the presentation of awards was the main event of the evening.
The Houstons were introduced by their son, former New York Knicks star Allan Houston, via video. “They have impacted so many,” he said of his parents. “I can’t even paint the picture well enough adequately to clearly articulate the impact that they have made on our family, as well as others.”
Allan’s introduction touched his mother.
“That was pretty special, wasn’t it?” Alice Houston said, accepting the award. “I mean, you all really did that!”
She acknowledged how special the Ottenheimer is to Jewish Louisville, noting how many other people could have been selected.
“So to have you select us, I wear this really with honor,” she said. “I also know that we share so many experiences, in terms of social justice and injustice and advocacy and commitment. I’ve been in rooms where you have been in fights with us.”
Wade Houston called the evening a “homecoming” for him and his wife.
“I am truly humbled to receive this award,” he said.
Assistant Membership Director Kathleen Horn, this year’s recipient of The Arthur S. Kling Award, thanked her parents for getting a JCC membership when she was a girl, ultimately leading to her job there.
She also paid tribute to Margot Kling, Arthur Kling’s daughter-in-law, who died on June 30.
“Just stories of what she was able to do, spearheading campaigns, keeping our community vibrant; it’s nothing short of inspiring,” Horn said.
Marsha Roth, a longtime volunteer, and staff member at the JCC, won the Ronald and Marie Abrams Volunteer of the Year Award.
Describing how she ended up working for the JCC and everything she has loved about the community, Roth pointed out her role in the effort to establish PJ Library to Louisville.
“I was privileged to give the gift of books to all of our Jewish children and to introduce so many new families to our Jewish community,” she said.
Jewish Community of Louisville Board of Directors Chair Dr. Ralph Green highlighted the organization’s challenges during the COVID-19 pandemic.
“We were concerned about how to keep the organization afloat and keep it solvent,” he said, “but through a lot of hard work, tenacity and dedication, your JCL staff and your JCL board has not only persevered, but it has met the challenge.”
Now, he said, the future is bright.
“I am here to tell you that we are strong, and we were determined to move forward.”
Green outlined three items of focus for the board in the coming year:
• The fight for racial and social justice: In particular, the community has responded to the recent increase in anti-Semitism locally and nationally with Safe Louisville, a program meant to help ensure the security and safety of all the Jewish institutions here.
• Serving the community during the pandemic and after the pandemic: Green cited the Meals on Wheels program, for which Chef Helen Impellizzeri has cooked 21,201 meals during the past year – a 50-percent increase over the previous year (see story, page 5). He also cited adaptations made to serve families during the pandemic; specifically, Camp J 365, which gave support to children engaged in nontraditional instruction (NTI).
• Aquatics and fitness: Both centers created a healthy and safe outlet for health and fitness during the pandemic, Green said.
Fundraising did not stop during the pandemic. Green said the JCC acquired $1.5 million in crisis relief and COVID programming grants, and the J On the Way capital campaign passed the $42.5 million milestone. Life & Legacy gained 500 commitments valued at more than $11 million.
“We are extremely grateful,” Green said. “We are who we are because you are who you are.”
The JCL also elected its new Board of Directors
Outgoing Co-chair Jon Fleischaker thanked the outgoing board members, Keren Benabou, Julie Ellis, Dr. Jon Klein, Amy Ryan, Dr. Jeff Tuvlin and Rabbi Beth Jacowitz Chottiner, all of whom have completed their terms. He also welcomed Ross Cohen, Jasmine Farrier and Amy Joseph Landon, who were nominated or re-nominated for three-year terms.
Ariel Kronenberg was renominated as program chair, and Cantor Sharon Hordes will join the board as president of the Louisville Board of Rabbis and Cantors.
The governance committee nominated or re-nominated officers for one-year terms: Green, chair; David Kaplan, vice chair-elect; Becky Ruby Swansburg, vice chair; Dr. Jeff Goldberg, treasurer; Beth Salamon, secretary; and Fleischaker, immediate past-chair.
Fleischaker presided over the board during the campaign to raise funds for the future JCC, which will be completed next year, as well as its groundbreaking and initial construction.
“The last five years have been extraordinary in their efforts,” Fleischaker said, “and important in being able to at least be on the road to achieving what I think we’re going to achieve.”

By Lee Chottiner Community Editor Gili Meisler and Bassam Aramin have reason to hate each other. Meisler, an Israeli, lost his older brother in the 1973 Yom Kippur War. The experience radicalized the then-teenager, who joined the anti-Arab Kach party, …