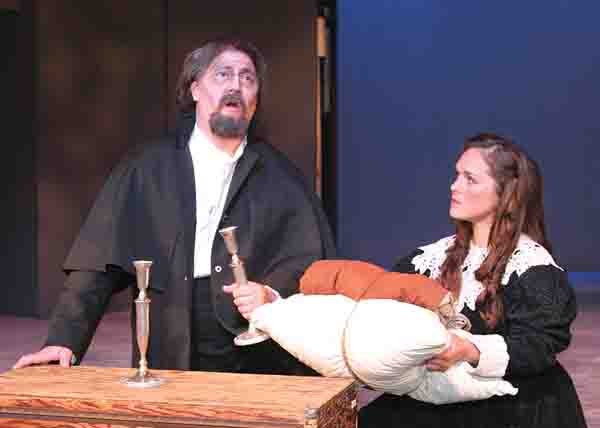 Not only is he presenting the regional premier of this epic tale, but he has recruited Simmons Falk from Actors Theatre of Louisville and Technical Director Patrick Jump to design and build the most elaborate and largest set in CenterStage’s history.

With three giant turntables, they expand the company’s limited stage area and allow the set to transform quickly and easily from one scene to the next as Jean Valjean (Jeremy Moon) traverses France and makes his way in society.

Les Mis is the story of a man whose grinding poverty drove him to steal bread for his sister’s family. When he was caught, he drew a long, harsh prison sentence imposed by a penal system that also branded him for life as an incorrigible convict. Released with papers identifying him as a convict, Valjean is stripped of hope and steals again, only to be turned around by an act of kindness.

The story unfolds as Valjean seeks to build a new, honest life, always pursued by Inspector Javert (Josh Gilliam) who never lets him totally escape his past. Has Valjean truly changed? Judge for yourself as you witness his treatment of Fantine (Jill Higgenbotham), Cosette (Lexie Stites and Madison Mclean as young Cosette and Margo Wooldridge as an older Cosette), and Marius (Jordan Price), Cosette’s suitor.

The story interplays with the class struggles and upheavals that define 19th Century France. Leffert integrates a large cast to bring this story to life with the able assistance of the CenterStage orchestra.

Les Mis opened Thursday night and performances continue until November 10. Tickets, $18 each, are selling quickly and several performances are already sold out.

To purchase tickets or for more information about CenterStage and the 2013/14 season, visit www.CenterStageJCC.org or call 502-459-0660.