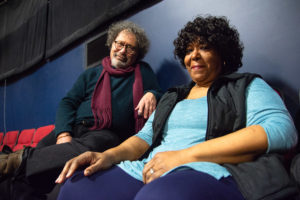 Karen Edwards-Hunter, pictured here with David Chack, the author of this piece, served as a bridge between Black and Jewish theatre in Louisville. (photo provided by David Chack)

Karen Edwards-Hunter, who died on Nov. 22, had that unique ability to build bridges between cultures, bringing people together from all backgrounds and all beliefs.
That is her real legacy.
The JAACKY Royale Theatre (Jewish, African American, Christian, Kentucky Youth), which Karen founded at the Jewish Community Center, had been in existence for about a year when I came to Louisville. Karen and I worked together to solidify it. In particular, she used her bridge-building ability to reach out to teens, their families and audiences throughout Kentucky. For this, she received the 1999 Arthur S. Kling Award from the Jewish Community of Louisville and the Jewish Community Centers of North America’s Innovative Programming and Education Award.
Karen regularly joined me on teen trips to the U.S. Holocaust Memorial Museum in Washington, D.C. When I started the ShPIeL Theatre in Chicago, we stayed in touch. I was so glad to hear that she married Phill Cherry, who had worked with me at Kentucky Shakespeare and had performed at the JCC as the Rev. Dr. Martin Luther King for MLK Day.
There was only one choice to join me as co-director of the 2019 production of The Green Book at Bunbury Theatre in Louisville. Karen’s quiet yet determined eye brought compassionate realism – without sentimentality – to the play. Once again, she was a bridge for our cast to the script and for our audiences of all backgrounds and ethnicities.
An important moment in rehearsals came when Karen and I spoke with the cast about “Jacob,” a Jewish Holocaust survivor. Everyone was held in rapt attention. She went on to say that anti-Semitism and the Holocaust should not be compared with slavery and racism. Each is distinct in the atrocities they cause and the suffering they bring.
But we also talked about how, in the same week in 2018, a white supremacist massacred Jews at the Tree of Life synagogue in Pittsburgh and in Louisville, Maurice Stallard and Vickie Jones were gunned down in a Kroger parking lot by another white supremacist merely because they were Black. Clearly, our stories are intertwined. Working with Karen generated sparks of joy and delight; the performances we directed blazed with wonder and light.
Memory in Judaism has special meaning. It is in memory that we continue to live and be inspired.
In this spirit, the talkback discussions for Imagining Heschel: Selections from a Play, which were held this month by Bunbury-ShPIeL Identity Theatre, were dedicated to Karen’s memory.
Rebbe Nachman of Bratslav said, “All the world is just a narrow bridge and the main thing is not to fear at all.” May Karen’s memory be for a blessing and continue to be that bridge leading to understanding, where fear no longer exists.

(David Chack is the artistic director of ShPIeL Performing Identity and the Bunbury-ShPIeL Theatre Project.)

By Lee Chottiner Community Editor LEXINGTON – Dec. 12’s violent incident during the Chabad menorah-lighting event serving the University of Kentucky is the worst sustained by that Jewish organization, but hardly the first. In an interview with Community, Rabbi Shlomo …

Guest Columnist Abby Glogower Everyone is familiar with the curse “May you live in interesting times,” and 2020 has certainly been the most interesting year in recent memory. There can be no question that we are living through historic events: …

D’var Torah Cantor Sharon Hordes I distinctly remember sitting down to write my annual D’var Torah for Community last March. I had just found out that school would be cancelled for both of my girls, due to something called the …