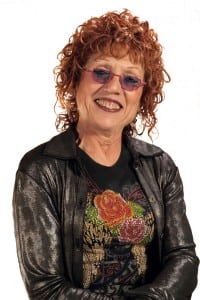 Judy Chicago, world-famous artist, feminist and philanthropist, will be in Louisville on Monday and Tuesday, April 13 and 14, to help National Council of Jewish Women kick-off a year-long celebration of the organization’s 120th anniversary of service to women, children and families.

Chicago’s passion for enhancing and improving women’s lives through her art and philanthropy is legendary, and has been an inspiration to organizations such as NCJW, which, since 1894, has striven to answer community needs through the creation of award-winning educational, cultural and service projects.

Chicago will be guest of honor at NCJW’s Patrons Party on Monday, April 13, from 6-8 p.m., hosted by Jewish Hospital at the Rudd Heart & Lung Conference Center, 201 Abraham Flexner Way.

On Tuesday, April 14, at 6 p.m., she will speak at a community-wide lecture, Judy Chicago: Five Decades, to be held at the Kentucky Center for the Arts, Bomhard Theater. Admission to the Patrons Party requires a minimum donation of $120 to NCJW and includes a ticket to the lecture. Ticketing and information about the lecture only is available at the Kentucky Center, 502-584-7777. 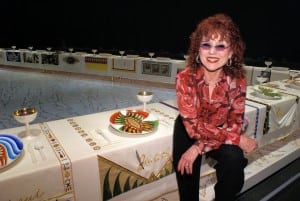 In the mid-1960’s, Judy Chicago began creating geometric paintings and minimalist sculptures, and by the early 1970’s, she was incorporating feminist representations into her art. Her best-known artwork, “The Dinner Party,” widely considered the first epic feminist artwork, serves as a symbolic history of women in Western civilization. First shown in 1979, it has been viewed by an audience of more than 15 million worldwide and is now on permanent display at the Brooklyn Museum.

The founder of Through the Flower, a non-profit organization dedicated to ensuring women’s achievements become a permanent part of our cultural heritage, Judy Chicago has become a symbol to all people of the power of art and its potential to contribute to a more just world.

On October 30, 1915, Ferdinand Friendly Wachenheiemer (the co-creator (with Edward R Murrow) of the television documentary concept in 1948) was born in New York City. Fred Friendly (his changed name) was also the president of CBS News (1964-66). Almost …

NEW YORK, March 5, 2015 (JTA) – Jewish perseverance, and more than a bit of chutzpah, lies at the heart of the Purim holiday. It is one of the reasons we are instructed to mark this raucous holiday with boundless …