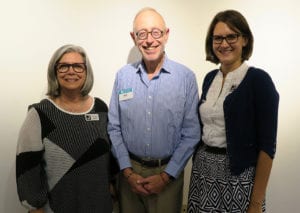 Mark Horowitz had two reasons for visiting The J’s Early Learning Center on Aug. 20.
First, the vice president of the JCC Association of North America (JCCA) and director of the Sheva Center for Innovation in Early Childhood Jewish Education and Engagement, came to check out the innovation happening at the ELC under Director Norma Cahen.
But he also came to see Assistant Director Jessica Bush, a fellow at the Sheva Center, who calls Horowitz her mentor.
“I think Jessica is really one of the great, forward-thinking, ready-to-go, lots-of-work-left-to-do people,” Horowitz said, “somebody who is really going to take the reins and begin to work and move (early childhood learning) into the next decade.”
For more than a year, Bush has been a part of this fellowship group that studies Jewish early childhood learning, honing her knowledge about best practices.
She also is working on a credential through a program called Aim 4 Excellence, a national credential for early childhood administrators.
The Sheva Center fellowship includes 28 people working at Jewish ELCs around the country. They study several different subjects over a three-year period, including leadership, children’s brain development, children’s nutrition and engaging with families.
The group also goes on retreats and visits. Bush has visited Boulder, Colorado, where her group saw a new ELC, the Boulder Journey School, one of the premier early childhood schools in the country.
The Journey School was one of the first to adopt the a teaching practice called the Reggio Emelia approach, which The J’s ELC is adopting. Reggio Emilia is a student-centered, constructivist approach, with a self-guided curriculum. Created by Loris Malagguzi after World War II, it encourages children to learn through experiences and focus on critical thinking and building a relationship with their environment.
The fellows will travel to Reggio Emilia, Italy, in November to visit the city’s school district and see first-hand the practices at work.
The fellows’ study is done through a Jewish lens, imparting Jewish values in the classroom, Horowitz said, which are considered universal.
“If we went to the Catholic church down the block, or a Buddhist temple, or whatever we do, people have the same wants and desires for their families and we want to address those,” Horowitz said. “And here we do it through Jewish values, through Jewish texts, through Jewish singing and dancing and more.”
Bush and her fellows also traveled to Israel, visiting Israeli early learning centers.
“I’ve done mock trips to Israel with the preschoolers, so I’ve been back and forth to Tel Aviv 25-30 times,” Bush quipped. “But to really go is amazing and has definitely completely changed the way that I talk about Israel in school and how I look at really creating experiences.
She called her Israel visit “intense,” noting that it included visits the Western Wall, the Golan Heights, David Ben Gurion’s kibbutz where they spent a day at its school.
“It was emotional, and it helped give me a deeper understanding of the complexity of the situation and the feelings of the real people there as opposed to what we hear on the news about Israel.”
Horowitz studied at Hebrew Union College-Jewish Institute of Religion, becoming a cantor, but an experience at an ELC made him fall in love with teaching young children, so he went back to school to begin a new career.
He spent many years teaching 2-year-olds before moving into leadership positions. For the past 11 years, he has been with the JCCA teaching teachers.
This isn’t his first visit to The J. He came here four years ago when Cahen first took over the ELC.
“I loved this place when I first came,” Horowitz said.